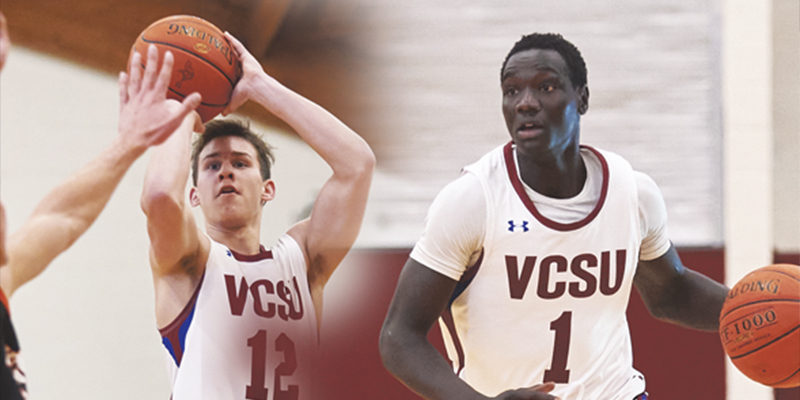 A pair of Big Nine standouts are making waves with the Vikings in Valley City, North Dakota 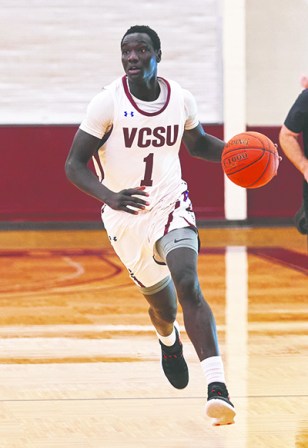 While they were once conference rivals, Hebrink and Oyet have always had a friendly connection as they played AAU basketball together. This season, the two are roommates at Valley City and they’ve grown closer than ever as they cope with being over 350 miles from friends and family.

“It’s like a brotherly love now,” Oyet said of his connection with Hebrink. “It’s an unbreakable bond that we’ve made. It’s been really special and he always lifts me up when I’m down.”

Oyet and Hebrink both come from big families as Oyet is one of six siblings and Hebrink is one of seven siblings. Both are driven to succeed on the basketball court and they both started to second guess themselves when they transferred away from their first college choices.

“I definitely had my doubts at the beginning of last year at Riverland and I questioned whether it was worth it,” Hebrink said. “I wondered if I should go to a school closer to home where my friends are, but I’m definitely glad I came out here (to Valley City).”

Oyet, who moved to the United States from Uganda when he was 10 years old, wasn’t sure if he was going to be able to play basketball this season due to his GPA, but he’s been able to get on the court and produce. He’s been a pleasant surprise for the Vikings as he has emerged as a scoring threat off the bench.

VCSU head men’s basketball coach Ryan Montgomery actually snagged Oyet while trying to pull in Hebrink, who the Vikings have been after since his senior year with the Packers. Hebrink’s father, James Hebrink, told Montgomery that Oyet, who played sparingly off the bench for RCC and RCTC, would be a good fit for the Vikings and Montgomery hasn’t been disappointed.

Oyet, a 6-3 junior guard, is averaging 14.9 points, 3 rebounds and 1.3 steals per game, while shooting 61 percent from the field, 42 percent on three-pointers and 90 percent on free throws in a shade under 20 minutes per game and he was recently named North Star Athletic Association player of the week. 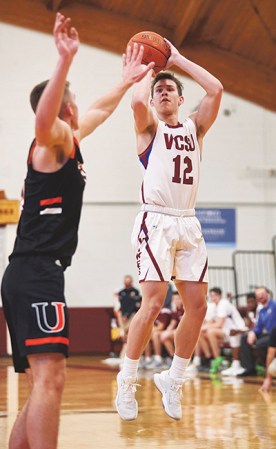 “Eddie’s best basketball days are ahead of him. He has really blossomed here at VCSU. His numbers have skyrocketed,” Montgomery said. “He can do things that other people can’t and that I can’t teach. We call him a wild card and when we throw him in the game, anything can happen. He’s had a lot of ups and downs in his life and he has current struggles with his family that he has to adjust to each week, but he’s a joyful person. He really brightens the locker room.”

Oyet didn’t speak English when he arrived in the U.S. and basketball has helped him adapt to his new life. He’s also received plenty of motivation and guidance from his older brothers, Sisko and George.

Montgomery likes what he’s given the team and he is impressed with the leadership role Hebrink has grasped.

“We liked what Tate brought to the table in regards to being a point guard,” Montgomery said. “He’s an overall winner. He’s got a swagger to him and he’s very confident in himself. He knows how to relate to people from other cultures and he’s one of those guys who people rally around.”

Unfortunately for the Vikings, the team is in the midst of a two-week COVID-19 quarantine just after they had rattled off six wins in a row. That means Hebrink and Oyet have had to spend even more time with each other than usual in a town with a population of just over 6,000 people that has no McDonald’s or Wal Mart. They’ve passed the time with some intense FIFA video game matchups and they’ve also stayed focused on getting back on the court.

“We have our days, but it’s a lot of fun. I would rather be with (Oyet) than at home in my room by myself, where my little brother is bothering me,” Hebrink said. “(The quarantine) has been tough. It wasn’t easy getting hot like that and then getting shut down for two weeks. We’ve been working out on zoom together. We even had Thanksgiving dinner together over zoom since none of us were able to go home.”

When the Vikings (6-1 overall) get back on the court, Hebrink thinks they can be the best team in the conference and Oyet sees that potential as well.

“Every team you play for is not the same and you’ve got to work with everybody and try to help each other. Tate and I are fitting in better here,” Oyet said. “The offense is really free and there’s a lot of opportunities to attack. Our guys are really nice and we don’t have any ball hogs on the team. I’m just trying to get better and the team is really comfortable. The sky is the limit right now and we can do a lot of great things.”

VCSU (6-1 overall) is scheduled to return to action when the Vikings host Presentation College at 7:30 p.m. on Dec. 11.