That’s up from the current $42 per student the school is currently operating on, made possible by booming enrollment in previous years resulting in the one of the lowest per student spending in the state.

However, the referendum was turned down by voters, pushing the district to make cuts and find other revenue sources.

Revenue coming into the district from per pupil funding from the state has not kept up with inflation, prompting the need for the referendum in the first place.

There is the possibility that Austin and districts in the same boat could get some help should the state legislature pass Health File 16, which would set funding based on last year’s enrollment.

“There is real hope the legislature will consider funding this year on last year’s student count,” Volz said. “That will increase our revenue upwards so we’re not running on massive deficit spending.”

What makes this difficult, however, is there is no indication if and when this might happen. Despite a slightly optimistic report in November, the State of Minnesota still saw a massive hit to its budget when surplus turned into the deficit.

“They are seeing challenges as well,” Volz said.

The district will also be looking to amend the budget between now and February depending on what the legislature may do and other factors, including a pair of federal grants APS was recently approved for.

Once the amendments are made to the budget, then that will be taken to the Board in June to set it for the 2021-22 school year.

The passing of the levy came after a favorable audit of the district that at the same time acknowledged the challenges APS is facing.

However, the district is still seeing a higher than normal failure rate among students, though not as bad as some districts.

Corey Haugen, director of Research Evaluation and Assessment, reported upticks in the failure rate, but in comparison to the districts like Worthington and Forest Lake, who have made similar transition plans, Austin is still fairly low.

The highest raise is coming from IJ with a rise from the three previous school years to 6.6 percent. Before, the percentage of Fs coming out of the school hovered between 1.6 and 2.1 percent.

At the high school, for instance, the failure rate for the first quarter is hovering at 9.4 percent for students in hybrid, startlingly different from all distance learning, where students are seeing a 22.9 percent failure rate.

That kind of difference is reflected across three schools.

“It’s lower than what we’re seeing in a number of districts across the state,” Haugen said, pointing out that it’s a testament to how teachers and administration are adapting. But at the same time it really centers on what many have been saying throughout the pandemic.

“It reinforces the need to bring our students back in schools as fast as we can,” said Superintendent David Krenz. 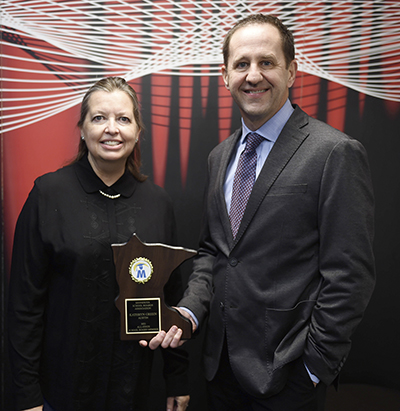 Before the start of the meeting, board member Kathy Green was presented with the All State School Board from the Minnesota School Board Association’s Kirk Schneidawind. Eric Johnson/photodesk@austindailyherald.com