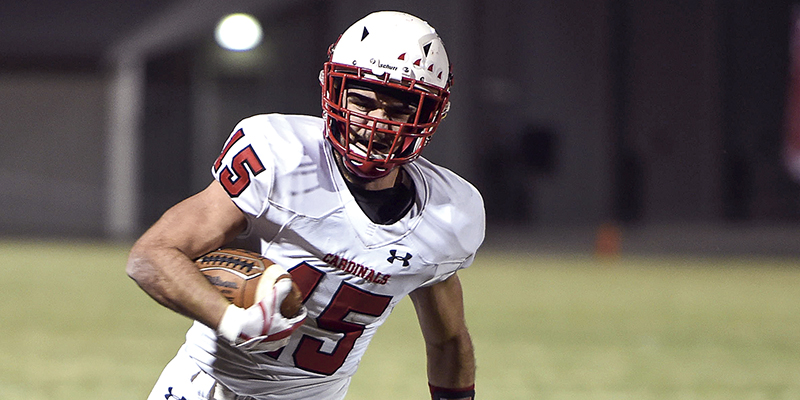 LeRoy-Ostrander’s Isaac Collier turns the corner on a carry against Southland this past October in Adams. Herald file photo

LEROY — When Isaac Collier arrived at LeRoy-Ostrander High School, he vowed he would make things better than they were.

Four years later, the changes are evident in the Cardinal football program and Collier has his next big goal in mind. He is going to take a chance at playing college football. Collier recently made his commitment to play at Division III St. Olaf College in Northfield. 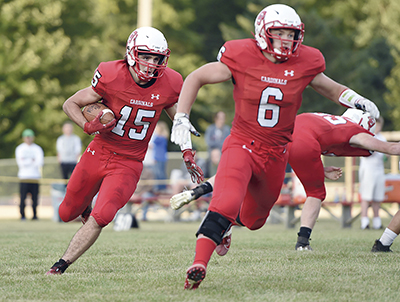 “I’ve always wanted to be the guy who makes sure everyone’s working as hard as it can. It’s always worth it,” Collier said. “When I was a freshman and 10-grader, the older guys worked hard and I took that from them. As I got older, I took guys who were younger than me and I worked out with them alot. I wanted to get that sense into them.”

The Cardinal football team went 6-11 in Collier’s first two years on the team, but went 14-3 in the past two seasons. Collier was the team’s running back this past season, running for 716 yards and 12 TDs in seven games. He also had 36 tackles, four sacks and an interception on defense.

But Collier’s impact goes far beyond the field. L-O head coach Trevor Carrier said his goal-driven attitude had a permanent reflection on football at the school.

“He’s just a good leader, on and off the field,” Carrier said. “A lot of coaches have cliché about leaders, but I don’t have to exaggerate with him. He’s the first one in and the last to leave. In sprints, he’s always going as hard as he can and sometimes you have to tell him to slow down. The kid’s got a lot of drive. He sets goals and he goes out and accomplishes them. I think that’s rare. He wants to be great at everything. You can’t break every tackle or make every shot, but he works hard.”

Collier has seen the support for Cardinal football grow massively in the past four years, especially when the team won the District title last season. It’s something he’s relished and it’s something he’s going to look back on fondly when he goes off to college next fall.

“I’m going to miss it. I’m never going to get that small town environment where everyone knows who you are,” Collier said. “The whole community was coming to our games and supporting us. They loved us. Before these last two years, we were kind of like nothing and we were just the town football team. It’s such a great feeling being under the lights and knowing the whole community is behind your back. It gives you something to play for.”

Collier, who is an All-State Academic selection, likes that St. Olaf is a smaller campus and he hopes he can have a big impact on the Oles, like he did for the Cardinals.

“I know I’m going to be starting again from the beginning, but I’m going to try to do the same thing at the next level that we did here,” Collier said.

St. Olaf’s coaches have said they plan to use him as a running back, but he is willing to play anywhere they put him.

Carrier thinks that Collier has a solid chance of making a splash at the next level.

“I think the sky is the limit,” Carrier said. “Playing at the next level is difficult and kids can get lost quickly, especially when you have to start over and you’re not the man. I worry about a lot of kids, but I don’t worry about Isaac. He’s going to give everything he has. I think St. Olaf got a good player.”

Collier has learned a lot in the classroom and in competition at LeRoy-Ostrander, but his most lasting memory will be the long hours he spent away from the lights and in the weight room.

“What will stick with me is the fact that we started as that losing team and the years that I grew up, so much changed. For me to look back at that small weight room in LeRoy and know what I came out of that is big,” Collier said. “Even the smallest little room can get you places if you put your mind to it.”