A dance and a favorite 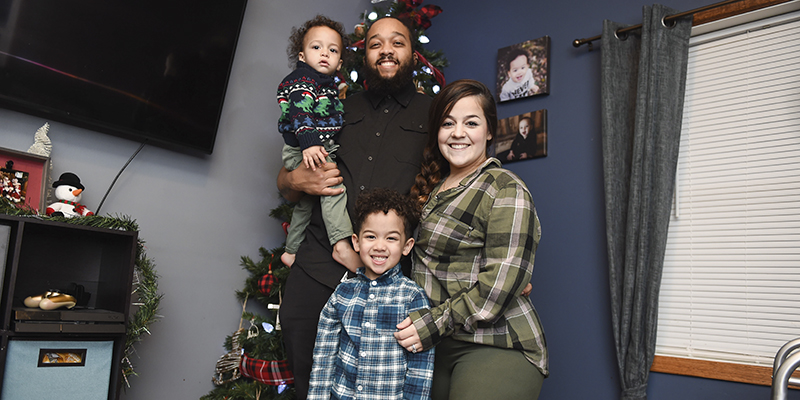 The Tovar family — Michael, Teiler, Stiles and Silen — has taken their musical talents to the world of Tik Tok. A simple video clip of Michael and his sons Stiles and Silen has resulted in millions of views on the channel. Eric Johnson/photodesk@austindailyherald.com

In the age of social media, things can turn on a dime. Something meant to be a few seconds of fun can be something much more.

The Tovar family is a prime example of this. Just a short burst of dancing fun has taken the Tik Tok world by storm, resulting in millions of views and thousands of likes.

“We’ve been doing Tik Tok for a while,” Michael Tovar said of the video. “This one was just going to be a Thanksgiving Tik Tok.”

The short clip, which can be viewed here, starts with Michael and his sons, Stiles (4) and Silen (1 1/2), looking at the camera as a Christmas tune begins to play. As it does, the trio break into their dance, which carries them through the video.

Initially, it was going to be Michael and Stiles and was conceived that morning as a way to get excited about Thanksgiving. It required very little planning.

Then the little one got involved and Michael, Stiles and Silen got into the groove. Video done, out the door for Thanksgiving, all without knowing just what was about to happen.

At about 10:30 a.m. Michael’s phone started buzzing with notifications from Tik Tok.

Michael said he had made videos with the boys before that brought in a good amount of likes, but this was on a whole new level.

Their mom, Tailer, admitted that the boys don’t really understand what has happened with the video and it’s popularity. To them, they are just having fun with their dad.

“It’s fun for them and for the people that see it,” she said. “It’s super fun. We’re glad to see other people recognize how talented our kids are.”

It’s easy to see where the talent comes from. The boys are surrounded by music on both their parents’ sides. Stiles has his own drum kit that continues to enthuse him.

“It’s a pretty good experience,” Michael said. “I had music and it was big for me me. Seeing it in my kids is just amazing.”

Both parents have seen the positive come out of the experience.

If you want to watch the video or other videos the family has made through Tik Tok, visit them @bearlytovar.