Born Oct. 4, 1926, in Tacoma, Washington, Robert Eugene Bush lived with his mother in Raymond, Washington, after his parents divorced when he was four. His mother ran the local hospital, which tended to many loggers who suffered accidents with their axes and saws. Bush and his sister helped out in the hospital by disposing of amputated limbs. In 1943, the then 17-year-old Bush enlisted in the Navy Reserve with his mother’s permission. With his background in the hospital, his selection as a medical corpsman was a natural fit for him.

Bush completed basic training at the Farragut Naval Training Station in Idaho and later graduated from the Naval Hospital Corps School. After a brief assignment at the Naval Hospital, Seattle, he received further training at the Field Medical Service School, Fleet Marine Force, Camp Pendleton, California. On Oct. 4, 1944, his 18th birthday, Bush was informed he would sail to the Russell Islands to be attached to a Marine rifle company. He was later assigned to Company G, Second Battalion, Fifth Marines, First Marine Division and promoted to the rank of hospital apprentice first class. 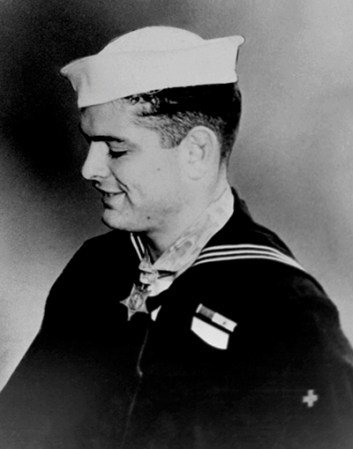 On April 1, 1945, the First Marine Division landed on the Japanese island of Okinawa. Like many corpsmen, Bush found himself constantly tending to the many wounded in the bloody fighting that followed.

On May 2, the men of Company G were planning an attack against a hill containing a dug-in Japanese position. Before the planned assault, 20 men, including a lieutenant, were reconnoitering the area when they came under attack by Japanese soldiers hiding in camouflaged foxholes. In the first few minutes of the fight, 11 of the 20 marines were killed or wounded, including the lieutenant.

As the Japanese blasted the area with machine gun and mortar fire, Bush went from one fallen marine to the other and tended to the wounded. When he reached the lieutenant, Bush noticed his eyes were dilated and began a blood plasma flow to revive him.

As he held the plasma, several Japanese soldiers charged his position. Holding the plasma in one hand, Bush drew his pistol and fired into the oncoming Japanese until his ammunition was spent. He then grabbed the lieutenant’s carbine and shot several Japanese soldiers at point blank range. During the fight, several enemy grenades went off nearby, piercing him with shrapnel and causing him to lose one eye.

When the lieutenant recovered and was able to evacuate under his own power, Bush covered him by shooting at the Japanese soldiers as they raised their heads. When the carbine ran out of ammunition, Bush grabbed a discarded carbine, outflanked the enemy position and systematically shot at the Japanese machine gun crews. Because the battle was so loud, the Japanese were unable to locate him. Bush then got within 20 feet of the Japanese and killed every member of the enemy force in the span of a few minutes.

When the marines joined up with him, Bush refused treatment for his wounds, opting instead to continue to treat the wounded. After he had administered aid to the wounded, he collapsed on his way to an aid station and was evacuated.

After nearly two months of hospitalization, Bush was honorably discharged. He re-enrolled in high school and got engaged to his high school sweetheart, Wanda Spooner.

Shortly thereafter, Navy Secretary James Forrestal called Bush to inform him that he had been awarded the Medal of Honor. Bush thought it was a hoax, but when Forrestal convinced him it was genuine, Bush began to argue about whether or not he deserved it. He agreed to come to Washington, D.C. and moved up his wedding date so the trip could double as a honeymoon. On Oct. 5, 1945, one day after his 19th birthday, President Harry Truman presented the medal to Bush on the South Lawn of the White House. He was the youngest member of the Navy (not counting Marines) to receive the Medal of Honor in World War II.

In 1951, Bush founded the Bayview Lumber Company in South Bend, Washington, and Bayview Redi-Mix in Elma, Washington. He was active in championing veteran causes and attended every presidential inauguration from Dwight Eisenhower to George W. Bush (except Lyndon Johnson’s 1965 inauguration. Johnson did not invite any Medal of Honor recipients). He was a 2001 recipient of the Four Freedoms Award.

Bush died on Nov. 8, 2005, in Olympia, Washington. He is buried in Fern Hill Cemetery in Menlo, Washington.

The Robert E. Bush Naval Hospital in Twentynine Palms, California, and the Bush Health Care Clinic at Camp Courtney, Okinawa, were named in his honor.