Author’s note: This is the last of my yearlong “50 states, 50 heroes” column. Thanks for reading.

Born Dec. 17, 1919, in Cheyenne, Wyoming, Vernon Joseph Baker was raised by his grandparents after he was orphaned at four-years-old. As a child, he struggled with his anger and spent some time at Father Flanagan’s Boys Town in Nebraska. After high school, Baker worked menial jobs. Hoping for something better, he attempted to enlist in the Army, but the recruiter turned him down because he was Black. He tried again in June 1941 and was accepted into the infantry. 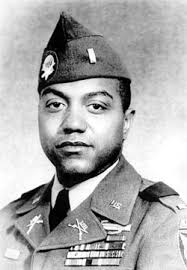 Baker attended basic training at Camp Wolters in Texas and was placed in the segregated 25th Infantry Regiment. In October 1942, while stationed at Fort Huachuca, Arizona, Baker was selected to attend Officer Candidate School at Fort Benning, Georgia. Upon completion on Jan. 11, 1943, he was commissioned a second lieutenant and was assigned as a weapons platoon commander in Company C of the 370th Infantry Regiment, 92nd Infantry Division, known as the “Buffalo Soldiers.” As with many segregated units, the 370th consisted of Black soldiers who comprised the enlisted ranks, Black junior officers and white senior officers. Baker was the only Black officer in his company.

On Aug. 1, 1944, the 370th landed in Naples, Italy, to take part in the Allied push toward the Gothic Line. In October, Baker was severely wounded after fighting with a German sentry while on night patrol. He spent two months in the 64th General Hospital in Pisa before returning to his unit.

On April 5, 1945, the Company C was near Viareggio, Italy, when it was ordered to launch a dawn attack against the German artillery stronghold of Castle Aghinolfi. Baker, leading his platoon of two light machine gun squads and two mortar squads, moved ahead of the other platoons to a shallow ravine about 250 yards from the objective. It was then that the Germans opened fire.

As he and his men took cover, Baker spotted two observation scopes pointing out of a mound in the hill. Realizing the Germans were using the position to direct fire, Baker crept up to the mound and killed the two enemy soldiers inside.

After destroying an enemy machine gun nest, Baker was joined by the company’s commander, Capt. John Runyon. At that moment, a German grenade rolled in their direction, but failed to explode. As he shot the German who threw it, Baker spotted a dugout in the hillside. He blasted the entrance open with a grenade and killed three more Germans, including a sniper.

As Baker’s platoon moved up, they were spotted by the Germans, who launched a vicious mortar attack. Overcome with fear, Runyon said he would return with reinforcements and ordered Baker to cover the company’s retreat. Baker and his men remained behind, knowing full well they would not see Runyon again.

Over the course of 12 hours, Baker and his men were under constant attack. At one point, they were attacked by a German weapons platoon disguised as medics. Of the 25 men he led into battle, 19 had been killed. Low on ammunition and wanting to keep the rest alive, Baker made the decision to withdraw. He later recalled that his men wanted to stay, but he wanted to ensure their safety.

As they withdrew, Baker and his remaining men destroyed two more enemy machine gun nests before making it back to the American line.

The following day, Baker volunteered to lead a battalion-wide assault on Castle Aghinolfi. As he led the attack, Baker saw the bodies of the 19 men killed the day before. All of them had bare feet because the Germans had taken their boots and socks during the cold night.

The battalion came under heavy fire and was forced to maneuver through a minefield, but was ultimately successful in capturing Castle Aghinolfi.

After the war, Baker re-enlisted in the Army. He served in the Korean War with the 11th Airborne Division and retired from the Army in 1968. He then worked for the Red Cross at Fort Ord, California, where he counseled needy military families. In 1986, he retired and moved to rural Idaho to pursue his love of hunting.

On Jan. 13, 1997, President Bill Clinton presented Baker with his long overdue Medal of Honor during a ceremony at the White House. Baker was the only living Black World War II veteran to receive the medal.

Vernon J. Baker Medal of Honor Main Street in Clarinda, Iowa, was named in his honor in 2006. On Sept. 11, 2008, Baker was awarded the Sandor Teszler Award for Moral Courage and Service to Humankind, along with an honorary doctorate, by Wofford College in Spartanburg, South Carolina.

Baker died on July 13, 2010 in St. Maries, Idaho. He is buried in Arlington National Cemetery.