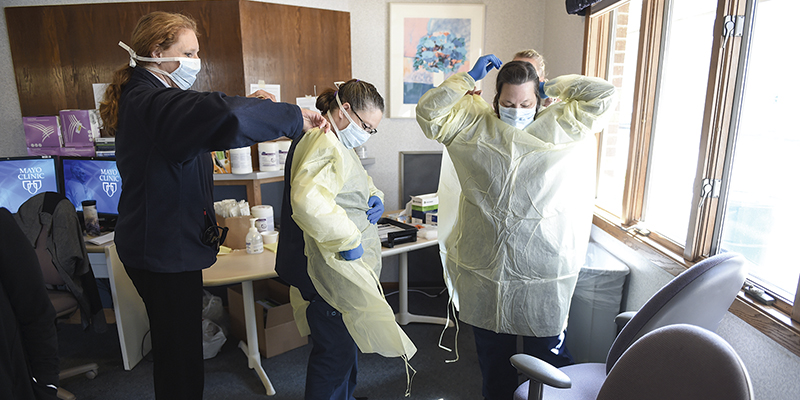 Medical staff put on protective clothing at the newly set-up drive-thru clinic for COVID-19 testing in March of this year. Herald file photos

It dominated a year as a running headline at home and across the nation.

But while it was the overarching theme of this year, COVID-19 was just one of the big area stories of 2020.

Below are the 10 of the biggest stories of the year.

By March, the coronavirus pandemic had reached the United States, with the first case in the nation being reported in Washington in mid-January.

The first case in Minnesota was announced on March 6. By mid-March the Minnesota State High School League abruptly cancelled all sports while around the same time schools began going to distance learning.

It was a challenge from the get go for schools to suddenly switch to a platform of learning across cyberspace.

“That was a big challenge,” said I.J. Holton Intermediate School fifth grade reading and social studies teacher Amanda Gafkjen in March. “That was two days before and then we weren’t coming in anymore. We were all trying to stay apart as much as we could. Teachers collaborated, but they were spread out, not next to each other.”

Mower County’s first case came later in March while the first death related to COVID-19 came in May. 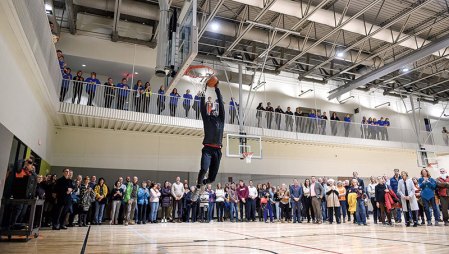 The Kris Fadness Gym at the Austin Community Recreation Center was officially christened with Austin boys basketball players dunking during the unveiling of the center in January. Herald file photo

After nearly four years in development, the YMCA at the Austin Community Recreation Center opened to the public in February.

The rec center is one of the last major projects stemming from Vision 2020.

The site of the rec center was the old Austin Utilities plant and in October of 2016, the Austin City Council put their stamp on the project, approving it by a vote of 5-2.

Construction of the rec center began in July of 2018 and opened to the public on Feb. 3.

“It’s spectacular,” said Executive Director Diane Baker. “I walked upstairs and walked into the spin studio and I got teary-eyed. This building is pretty special. It’s like no other Y. It’s just so unique and it’s bringing everybody together.”

The project came to a final cost of $36 million. Of that cost, $25 million came from The Hormel Foundation, with $6 million coming from public donations and another $1.5 million from Hormel Foods.

While the 2020 Presidential Election garnered a significant amount of attention, several new candidates were elected on the state and local level.

Councilman Steve King (Second Ward) was elected Mayor of Austin in November. He will be replacing Mayor Tom Stiehm, who announced earlier this year that he would not seek re-election.

King, Oballa, Postma and Fischer will all be sworn-in on Jan. 4.

Republican candidate Patricia Mueller of Austin defeated incumbent Rep. Jeanne Poppe (DFL) in the race for the Minnesota House District 27B seat. This was Mueller’s first bid for public office.

In January, the Austin Public Schools Board will welcome newly elected members Cece Kroc and Even Sorenson, along with incumbent Don Leathers. All three were elected to four-year terms.

Three-term Mower County Comm. Tim Gabrielson (District 1) passed away on Nov. 10, one week after winning re-election to a fourth term on the Mower County Board of Commissioners. The cause of death was listed as medical in nature.

After his death, the county board called for a special election. Seven candidates filed to run for Gabrielson’s seat; a primary election will be held in February, followed by a general election in April.

City approves implementation of the Classification and Compensation Study

In a 6-1 vote held on March 2, the Austin City Council voted in favor of implementing certain components of the Classification and Compensation Study.

The study, conducted by Flaherty & Hood, P.A., was conducted to ensure that city employees are paid equally according to their job responsibilities while competing in a rapidly changing employment landscape. The council hoped to use the results to address past difficulties the city has faced in recruiting and retaining qualified employees by seeing how it compared to cities of comparable size.

The last time the City had conducted a similar study was over 25 years ago.

Councilman Jason Baskin, who cast the only dissenting vote, said he was concerned about the implementation possibly requiring a double-digit tax levy increase as well as 20-30 percent wage increases for some. He was also said there could be possible constraints on the ability to make needed community investments.

The pandemic may have kept many people indoors, but crime did not take a break as law enforcement was frequently called this year on reports of shots fired.

According to Austin Police Chief David McKichan, law enforcement responded to 72 complaints of shots fired as of Nov. 30. This figure does not include a firearms incident on Dec. 13 that led to the arrest of an adult male and a juvenile male.

By comparison, firearms complaints reported in previous years were as follows:

McKichan noted that these complaints do not necessarily mean an actual firearm was involved. Some complaints may stem from someone seeing a suspect with a BB or airsoft gun, while others report something that “sounds like gunshots,” but are actually other sources of noise, such as fireworks.

That being said, McKichan stated that the APD has had to deal with numerous calls that involved actual firearms in 2020.

Austin police enter a house in the 800 block of Third Avenue NW earlier this month, the scene of a stabbing that sent multiple people to the hospital. Herald file lphoto

In an act of violence that shocked the Austin community, a teen died from wounds sustained during a stabbing assault on Dec. 15.

Court documents state that police responded to a call of a male suspect stabbing individuals at a residence in the 800 block of Third Avenue Northwest at about 8:50 a.m. on Dec. 15. The documents state the suspect, Jaime Arquimides Vaca, 27, of Austin was assaulting a woman at the residence when her son, 15-year-old Julio Cesar Guadalupe Rodriguez, attempted to intervene. It was reported Vaca stabbed Rodriguez during the altercation.

Rodriguez was transported to the hospital, where he succumbed to his injuries. His mother, who was also stabbed during the altercation, was hospitalized with severe injuries. 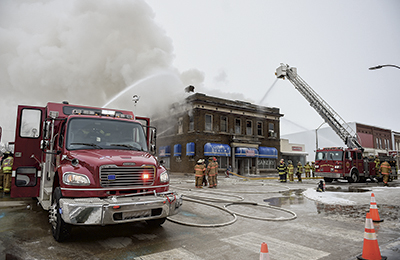 Water is dumped on The Bakery in January as fire departments from around the area battle a blaze that claimed the building. Herald file photo

Tragedy struck a long-time Main Street business in Blooming Prairie on a frigid day in January.

Several fire departments responded to the community on Jan. 28 to battle  a blaze that would ultimately claim The Bakery.

The blaze was reported at around 6:10 a.m. after an employee reported smoke coming from the bakery.

“I’m in shock,” owner Greg Fristedt said as he watched the fire from across the street.

Along with the bakery an apartment on the second floor was claimed along with two other businesses located in the same building.

Another long-term project in Austin saw its opening in October.

On Oct. 21, a grand opening was held for the brand new MacPhail Center for Music and its new home within the Austin Public Schools annex.

The $14.5 million project will give a boost to music education for both MacPhail and students from Austin High School, all under one roof.

The project added 17,850 square feet of space and will expand the opportunities for young musicians for years to come.

“It’s very unique,” said Cheryl Berglund, director of the Austin site. “It’s one of a kind and it’s yet to be determined what it’s going to allow for.”

The Austin site is the only satellite outside of the Twin Cities metro area.

In May of 2019, it was announced that Dr. Zigang Dong, who had been executive director of The Hormel Institute for nearly 18 years, was stepping down and transitioning to an administrative role under University of Minnesota Vice President of Research Christopher J. Cramer and the Vice President for Academic and Clinical Affairs Jakub Tolar.

However, under a year later, it would come to light that Dong was part of an investigation by the National Institutes of Health and the federal government, which was looking at a push to steal cutting-edge science from American universities and institutes by China.

Dong was only a part of the massive investigation that spanned the United States and stemmed from a request by the NIN, pushing the University of Minnesota to look into a pair of grants submitted by Dong.

The concern was that Dong had not alerted the U of M of his foreign connections and research support from China.

The StarTribune ran a two-part report looking into the entirety of the push by authorities, in which Dong was mentioned. The investigation resulted in Chinese-American scientists leaving both the MD Anderson Cancer Center and Emory University because of the investigation.

A chemist from Harvard University, Charles Lieber, was arrested and charged with making false statements to the US government involving funding he received from China.

“I think it was confusing to us because we thought we knew the relationship between this institute and the Chinese institute,” said Dr. Ted Hinchcliffe, who runs the Cellular Dynamics lab at the Institute.

Michael Stoll and Eric Johnson contributed to this story.