With winter sports in jeopardy, Kelly locks up his college choice 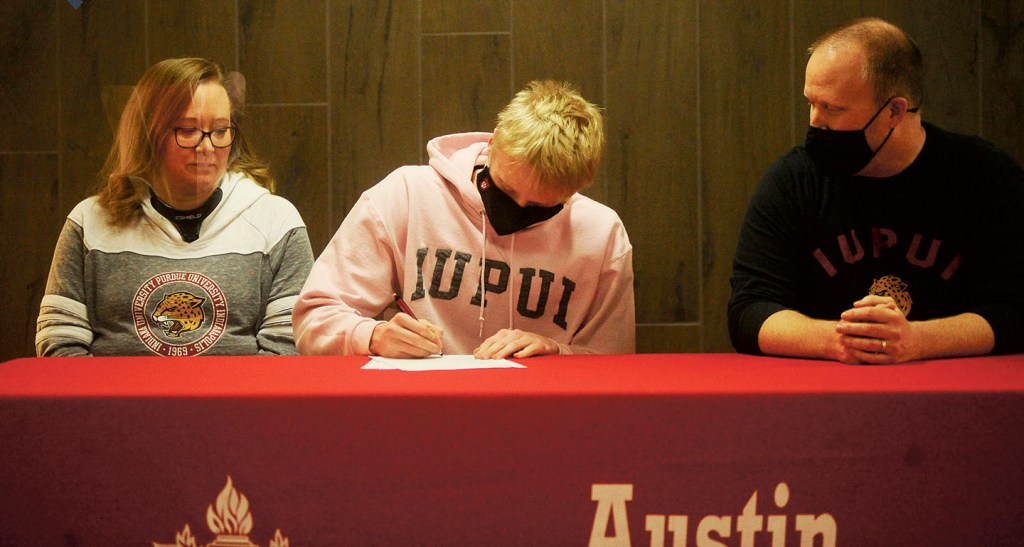 Austin senior Logan Kelly’s big day was low key and laid back, but that’s just how he wanted it.

Kelly signed his national letter-of-intent to swim at Division I Indiana University-Purdue University at Indianapolis under a scholarship at Austin High School Monday. While the attendees mostly included his family, that was enough for Kelly.

“It was nice. I’m not a big fan of the cameras or interviews, but it has to happen sometimes,” Kelly said.

Kelly is a two-time All-American swimmer, a 10-time state placeholder, a Big Nine record holder, and a Section 1A record holder, but he may not have a chance for any of those accolades this season. With COVID-19 rates rising in Minnesota, the forecast for winter sports are starting to blur.

“I hope the season goes through and I hope state happens, although it sounds like that might not happen,” Kelly said.

Kelly has been swimming on his own three times a week and he’s also been lifting weights to stay in shape. He has his sights set on a big USA winter meet in December, where he will have the opportunity to chase an Olympic cut time. If he hits a cut time, he would have the chance at an Olympic trial.

“I haven’t really been swimming for very long this year so I don’t know how it’s going to go,” Kelly said. “I hope it goes well.”

With the pandemic slowing down his senior year, Kelly has taken the time to be a little more social and relax.

“I’ve been working on my social skills and this year I can talk to people more comfortably than in the past,” Kelly said.

Kelly’s former teammate and recent Austin grad Rafe Dolan Peterson will be swimming at University of Wisconsin Green Bay, which sometimes competes against the Jagaurs of IUPUI.