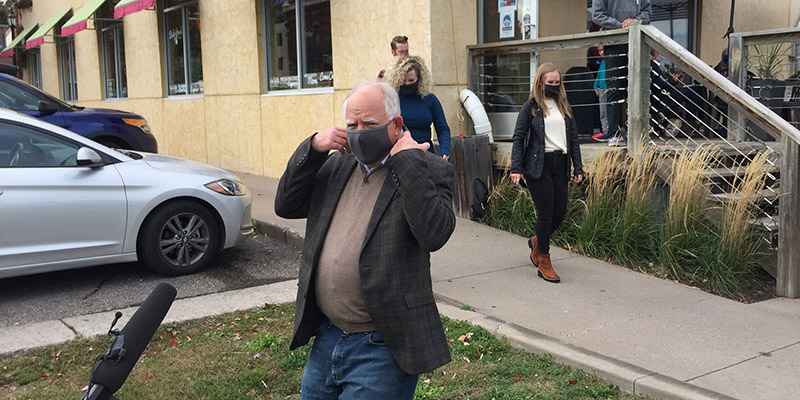 Gov. Tim Walz puts on a mask as he walks away from The Daily Grind Espresso Café in Stillwater in September. Mark Zdechlik | MPR News file

By Brian Bakst and Catharine Richert

Starting Friday, bars and restaurants in Minnesota will see new restrictions as the state works to slow the spread of COVID-19.

The changes include ending in-person service at 10 p.m, no bar seating or counter service and limits on standing games such as darts and pool.

Beyond that, the state plans to cap wedding receptions and other events at 50 people on Nov. 27, down to 25 after Dec. 11.

Gov. Tim Walz is expected to announced the new curbs at 2 p.m. MPR News learned of the details via people briefed on the new restrictions but who asked not to be identified.

The moves come after a week of grim records upon records in the COVID-19 fight. The state hit a high-water mark of nearly 6,000 new daily cases, and hospitalizations and deaths have been marching upward, too.

As of Monday, more than 30,000 people in Minnesota had active COVID-19 cases.

Walz has said he would issue new restrictions if the state’s coronavirus numbers deteriorated — and on Monday, the governor told reporters he plans to announce new restrictions that target active spreaders of COVID-19, beginning Tuesday.

The governor’s office announced that he plans to address the state at 2 p.m. “to announce next steps in [the] state’s response to COVID-19.”

There are hints those next steps will involve tighter restrictions on bars. The state has identified 117 COVID-19 clusters connected to bars, which have directly infected at least 2,400 people. Half of those clusters were identified in October alone, just as community spread of the virus began to spiral out of control.

But Walz also signaled that a wide-scale shutdown, similar to what he imposed in the spring, as the pandemic was beginning to take hold in Minnesota, is unlikely at this point. He called the springtime shutdowns “a blunt instrument.” He hinted that the measures he plans to announce this week would be more “surgically, much more aggressively” focused.

The governor has been under increasing public pressure to make some changes to the state’s COVID-19 response as numbers rose starkly last week, much of that pressure coming from doctors. On Monday, 400 doctors signed a letter to Walz, asking him to issue new restrictions on bars, restaurants, gyms and other nonessential business. They wrote that the time to act to prevent further cases and deaths is now.

Meanwhile, as of Monday, more than 1,000 people were hospitalized in Minnesota with COVID-19 — on top of hospitals’ regular caseload of patients, a reality that is putting a dangerous strain on the state’s hospital systems.

Also on Monday, health officials announced that the state is adding more than a dozen new COVID-19 testing locations over the next few weeks, including 10 in armories around the state and several locations at Minneapolis-St. Paul International Airport.

The expansion in testing is based on the idea that the more people are tested, and the more frequently, the more likely the state will be able to isolate people from others when they have positive cases, and prevent the spread of the virus.

Walz said that the state’s expansion is aimed especially at 18- to 35-year-olds, a group that officials have identified as what the governor calls “the heart and soul” of the virus’ spread. People who fall into that age cohort are often asymptomatic or have mild symptoms, but also tend to be the people going to bars and restaurants, or getting together with friends, which state health official have warned against.

Asymptomatic transmission has become a primary driver of COVID-19’s community spread — but it eventually ends up in schools, long-term care facilities and hospitals.

The state’s message right now continues to be that, for people who continue to socialize outside their household, they should be tested — and often.