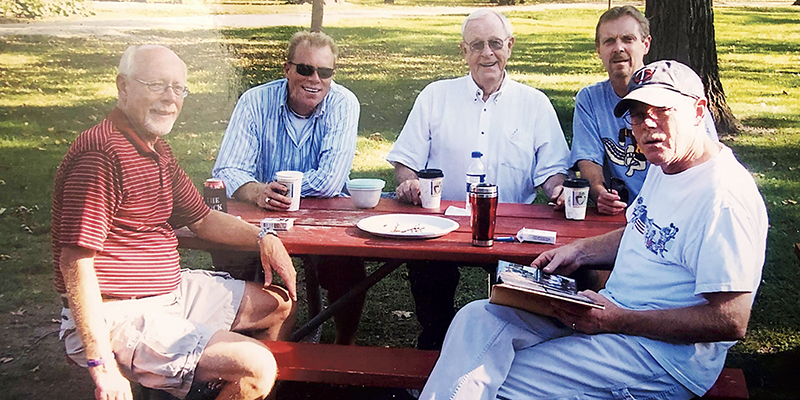 Tim Gabrielson, left, sits with friends. Gabrielson passed away earlier this week at the age of 71. Photo provided

For many, Tim Gabrielson was someone who always had time for them, including those in District 1, who Tim served as county commissioner for the past 12 years.

Tim passed away early this week from undisclosed medical problems. He was 71.

However, the legacy he leaves behind is one of kindness and a man who is willing to help and serve.

His son Jason Gabrielson’s memories are no different, growing up with a man who gave what he could of himself. 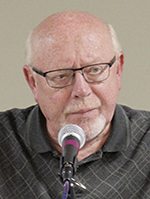 “He would always make time for anybody,” Jason said. “He would do any favors for any of his friends. Even with people he didn’t know really well … he would pull them aside and ask if they were okay.”

This willingness to help was also reflected in the 29 years Tim served as insurance agent.

“That was one of the things he loved about being an insurance agency,” Jason said. “He would be there to help them out and walk them through the process. He took pride in being able to help.”

“I didn’t matter what it was: baseball, football, racing. Especially racing,” Jason said. “It was naturally something we both liked. He always wanted to give the best opportunity to succeed.”

For over a decade, Tim served Mower County as commissioner and had grown into a commissioner that would always have a door open for his constituents.

“Tim was very loyal and dedicated to the people in his district,” said fellow commissioner Jerry Reinartz. “He was always available, whether it was someone calling him or stopping in to see him. He was always ready to see what he could do to fix things. He was a dedicated public servant.” 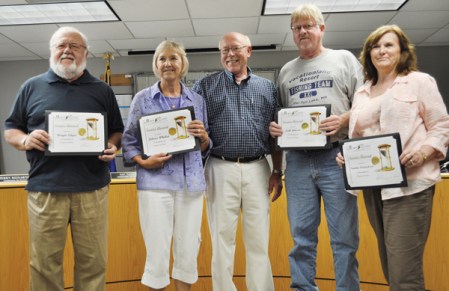 Tim Gabrielson was known by many to care deeply about his service to government. Herald file photo

Tim had been a commissioner for two years when Reinartz was first elected. Since then, Reinartz said he has thoroughly enjoyed serving with Tim.

“It’s been a very sweet time,” Reinartz said. “Tim was very conscious about his district and about his functions on the county board. He was always present on the general board or committee and dedicated.”

Between him, Reinartz and long time commissioner Mike Ankeny, there were over 30 combined years of experience. However, Jeff Baldus is currently in his first term as commissioner, serving as board chair. Having Tim’s knowledge on the board helped Baldus as he learned the ins and outs of the county commission.

“The knowledge … we’re going to miss that,” Baldus said. “I had many conversations with Tim and he was always answering questions for me. He always made himself available.”

A common theme among the rest of the commissioners is just how dedicated Tim was to his constituents. However, it often went beyond that.

On Thursday, the Association of Minnesota Counties circulated an email honoring Tim for his service, listing a long line of different groups and committees he was a part of, including a mention of the time he spent going to the Annual AMC Conference, actively engaging in matters across local, regional and state lines.

“He was one of the most dedicated commissioners I know,” Ankeny said. “He really worked at it. He took on a lot of committees that were tough and out of town. He was a great guy.”

Polly Glynn will be serving her third term as commissioner after winning reelection against challenger and former commissioner Ray Tucker.

She remembered Tim greeting her when she first won her seat.

“Tim was probably the first one to welcome me on the board,” Glynn said. “I was the first woman in many, many years and he was very kind and very helpful to me. There’s no replacing Tim”

But Glynn also remembered how Gabrielson was away from commission business: a kind and caring man.

“Tim was very caring,” she said. “Anything that was going on in your life he was interested and very compassionate about. Just such a kind person. He was a joy to be around.”

Whether it was county commission or with family and friends, all are remembering Tim as a man who always cared about other people.

“I would want people to remember my dad as a man that cared for and helped people,” Jason said. “Whether it was a customer, a citizen, friend or family, he would do anything for them and always did what he felt in his heart.”

Continuing Jason added, “He tried to lead by example and he was a good leader. He always taught us no matter the situation, stay humble. He grew up ‘poor’ poor and he never forgot that. I always respected that.”