The longest fall: Competing in the era of COVID-19 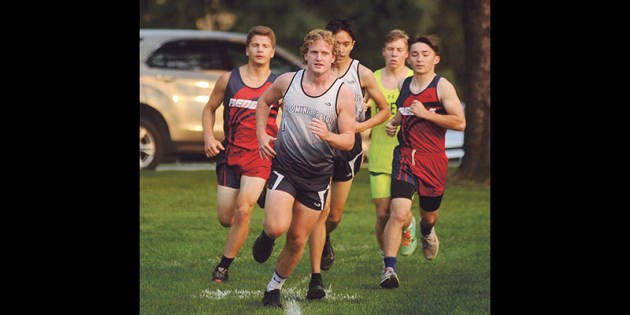 Blooming Prairie’s Luke Larkoski leads a pack of runners on a turn at the Blooming Prairie triangular Tuesday. Rocky Hulne/sports@austindailyherald.com 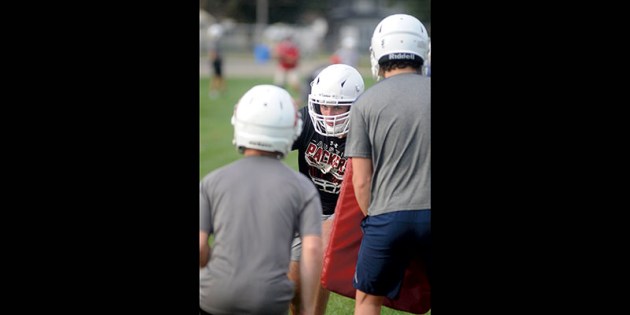 Ethan Owens pursues the ball during a drill at football practice in Art Hass Stadium in late September, not long after receiving the news that there would be a football season. Rocky Hulne/sports@austindailyherald.com 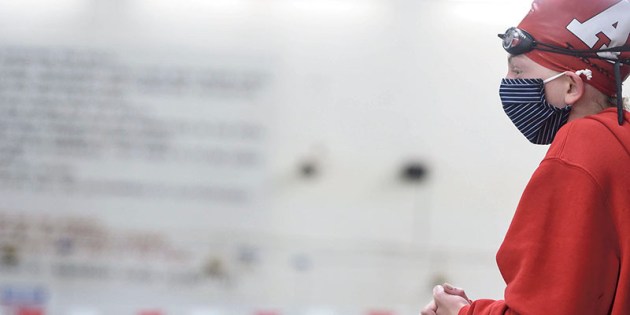 Austin’s Sydney Tobak watches from the stands during the first swim meet of the season. Eric Johnson/photodesk@austindailyherald.com 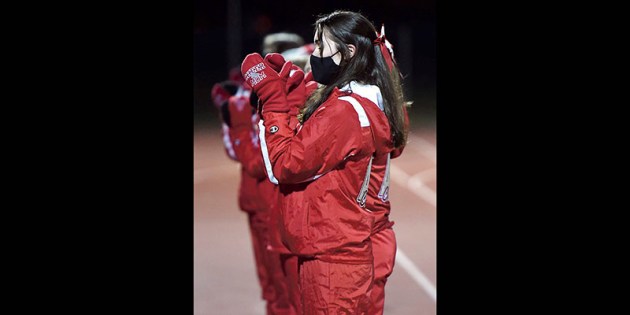 Throughout an incredibly challenging season, the Austin cheerleaders were always found on the football sidelines. Eric Johnson/photodesk@austindailyherald.com 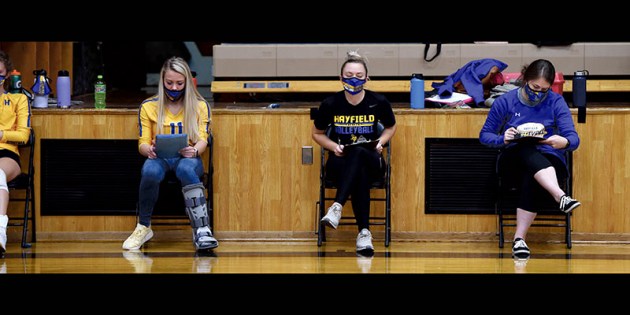 Hayfield coaches and players distance on the bench in a match against Blooming Prairie. Eric Johnson/photodesk@austindailyherald.com 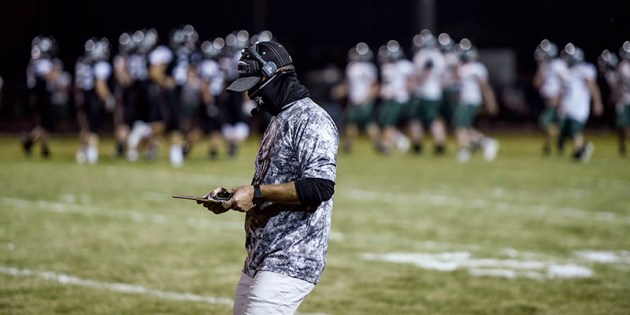 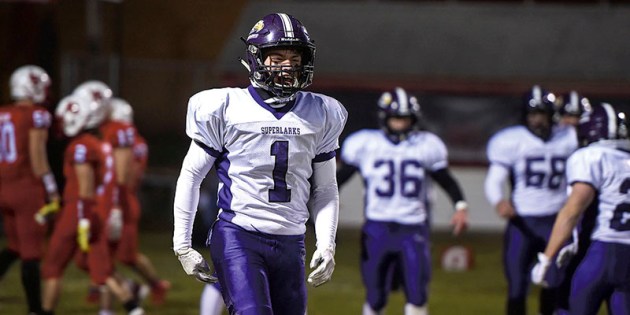 Grand Meadow’s Luke Speer celebrates after recovering a blocked punt in the endzone against LeRoy-Ostrander in October in LeRoy. In a season like no other, the athletes still were able to find what makes sports so special. Eric Johnson/photodesk@austindailyherald.com

Going into the 2020 fall season, none of us knew what sports in a pandemic would look like.

As it turned out, the action on the field was pretty normal and just as exciting as usual.

However, the games were played in mostly empty venues, there were no pre-game handshakes or locker room availability, and there were a lot of masks. What spectators didn’t see was the sacrifices some of these athletes made to make sure they were able to finish their seasons.

Many athletes kept their social bubbles small and wore masks while in public. They juggled practice schedules with distance learning and in-school learning and they had to fight off the fear of it all coming to an end on any given day.

If the pandemic has taught us one thing, it is the only thing that is certain in life is uncertainty. Every student who is currently in school has now learned that lesson and they’ve also learned to be independent in their learning and activities.

Those who put in time on their own in the offseason had success on the field and those who stayed motivated and kept studying when school was moved to distance learning last year stayed ahead in the classroom.

These lessons will follow these students for the rest of their lives and will keep them grounded and motivated.

Here are a few stories of the fall sports season.

It had been five months since the Austin Packers had competed in anything, but they made their return with a splash, although no fans or parents were allowed to watch the action.

The Packer girls swimming and diving team broke the COVID-19 induced high school sports hibernation period when they took to the pool and competed against Mankato East, which was virtually racing the Packers by logging its own times in Mankato.

After the meet, times were compared and a final score was determined. Austin didn’t compete in the same pool as another team until the Section 1A meet at the end of the year as the Packers had to learn to be self-motivated and competitive with their teammates.

During meets, Packer swimmers wore masks, they spaced out in the seating section of Bud Higgins Pool and they tried to create a regular meet atmosphere by pumping out music on the loudspeaker before events.

While many things were different, swimmers were still able to have eyes on them through a livestream that was put up on Youtube.

Michelle Morehouse, the mother of Austin swimmer Kadence Morehouse, was one of the many Packer fans who logged on and watched a virtual livestream of the meet. This year was the first time Michelle had not been to one of Kadence’s meets, but it was a sacrifice she was willing to make to have her daughter compete this season.

“It was a little weird to watch it on a screen, but we cheered her on from home,” Michelle said. “I’m glad Kadence got to swim this year. Everything is being done with safety in mind and we feel comfortable with Kadence being on the team.”

A time to reflect

As if 2020 didn’t hand high school students enough to deal with when the pandemic hit, there were also nationwide protests, some violent and some peaceful, that seized the attention of area youths.

While Austin remained calm through the unrest, the Packer boys soccer team felt they had to do something to show their unity. The team, which includes players from all across the globe, had most of its squad drop to a knee during the National Anthem before a September contest in Art Hass Stadium.

The move was not meant to disrespect the nation or the flag.

“We have players from many different cultures and we just wanted to show that we are together,” Austin senior Andres Garcia said. “We are united.”

Austin senior Henry Tolbert, a Liberian immigrant who went on to win the Minnesota Mr. Soccer award for Class A, said that he felt the move to take a knee brought the team a little closer together in a time when so many things are uncertain.

“When you see the news on TV, it can be scary,” Tolbert said. “We just want to be there for each other.”

Austin head coach Jens Levisen said the team approached him about the decision to kneel and he said he was fine with it as long as it was a display of unity and that it would not be disruptive.

The Austin student section didn’t garner the nickname ‘Sea of Red’by being mild-mannered and absent during big games, but COVID-19 certainly forced the fans to find new ways to be effective.

It was a cold and wet night in Art Hass Stadium with the Packer girls soccer team fighting to get some momentum going when AHS “superfans” Jordan Ransom and Nyaweng Deng walked in and took their seats.

Wearing masks and spreading out, Ransom and Deng did the best they could to keep the support going.

“We just want to be out here to support our friends,” Deng said.

With contests being limited to 250 spectators this fall, students had to be on the ball if they wanted to assure they would get into the game. Ransom said it took some planning, but it was worth it when he got to cheer on the Packers.

“We have to be active on social media and let people know when games are going on,” Ransom said. “We all make sure we’re spacing out and being safe.”

A different kind of run

Blooming Prairie senior Mitchell Fiebiger usually does his running on the football field, but this fall presented him with a chance to try a different kind of running. Fieibiger, who is a physical linebacker for the Awesome Blossoms, turned a few heads as he trailed towards the end of the pack at a cross country invite at the Blooming Prairie Country Club.

Eventually he gave way to his natural instincts and begged for an onlooking youth to throw him a football during the run.

“I kept asking him to throw it to me and he almost did,” Fiebiger said after the race. “I came out for cross country for something to do and it’s a lot different than football. I’d rather be playing football.”

Also running for the BP cross country team this fall was football standout Luke Larkoski, along with volleyball players Megan Oswald, Maggie Bruns and Bobbie Bruns. Bobbie turned out to be one of BP’s top runners and she didn’t mind the extra workload or the prospect of being a four-sport athlete.

“I was actually kind of glad when they moved volleyball season so I could run cross country,” Bobbie said. “This has been a strange fall without football games on Friday nights, but it will be cool to try and be a four-sport athlete.”

Make it on the run

For some schools, the pandemic gave athletic directors new ways to get games in and probably new ways to curse.

Outbreaks across the state caused teams to postpone, reschedule or outright cancel events throughout the year. By the time the football season reached the playoffs, approximately 70 teams had shut down their program for the year – including Hayfield, which went above and beyond the call rescheduling games.

Hayfield athletic director Chris Pack did whatever he could to keep the Vikings competing, including moving the final volleyball match of the season against Blooming Prairie to a 4 p.m. start on a Wednesday, right before Gov. Tim Walz was to announce that sports would be put on hold.

But Pack’s crowning achievement came when he found out the Blooming Prairie football team was going into a two-week quarantine about 28 hours before the Awesome Blossoms and Vikings were supposed to kick-off. Pack hit the phones and scrambled for an opponent, eventually landing River Ridge, Wisconsin, for a game that was played in Caledonia. Neither team was able to practice before the game and there was only a short film session at school before kick-off, but the Vikings were able to take the field.

“It’s been a crazy year,” Pack said. “Sometimes we’ve had to be a little creative, but we want to do whatever it takes to get the kids playing.”

Austin junior Molly Norton spent a good part of the first COVID-19 shutdown helping to feed seniors at the Mower County Senior Center, but she was glad to be back with a few of her friends this fall — even if it was in colder weather.

Norton was a member of the AHS cheerleaders, who were present for every Packer game this season – from the unseasonably warm weather opener to the final game, which dipped below freezing.

Norton, who will now miss at least a month of her dance season due to the latest shutdown, said getting on the sidelines was a much needed relief for her as she is part of the PSEO program at Riverland Community College.

“Being able to see the girls through sports and seeing people my own age is really nice. Now that they might take it away in the winter, it is a little upsetting, but we’ll get through it,” Norton said.

The cheerleaders wore masks throughout the year and they had to space out, which prevented them performing their stunts.

Austin cheerleader captain Jamie Miller said there were some adjustments, but she enjoyed the time she had on the sidelines – even in the cold.

“We were glad they didn’t play the season in March, even though it meant playing in November. Football is not football, unless it’s in the fall. The cold weather really just makes it football,” Miller said. “We’re usually closer together on the sideline, but we had to spread out. It was hard to do, but we made it work.”