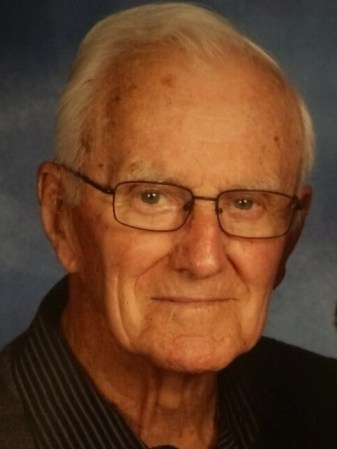 Raymond K. Neve, age 98, of Austin, passed away peacefully on October 28, 2020 at St. Mary’s Hospital in Rochester, after a short illness. He was born to Louis and Alma (Sauke) Neve in Walters, MN. Ray graduated from Austin High School in 1940. He later enlisted in the Army Air Corps and served during WWII. After returning home he met Audrey Gess. They were married October 19, 1947 and were blessed with three sons.

Ray was employed by the Milwaukee Railroad until his retirement in 1983. Ray and Audrey enjoyed many winters in Florida after Ray’s retirement. He was an avid golfer and continued to play into his nineties. He also enjoyed fishing and spending time at the family cabin in northern Minnesota. Ray was a skilled carpenter. He built and remodeled several of their family’s residences. He was a long time member of Our Savior’s Lutheran Church. Ray will be deeply missed by all of his family and friends.

Ray is survived by his wife, Audrey, of 73 years, sons David (Catherine) of Mankato, Jeffrey of Austin, and Kevin (Debra) of Bemidji; grandchildren Marie, Jennifer, and Sarah; sister Shirley Hovda; sister-in-law Caroline Neve; many nieces and nephews; sister-in-laws and brother-in-law. He was preceded in death by brothers Evan and Robert (Inez) and brother-in-law Les Hovda.

There will be a private family service at Preston Military Cemetery. A Celebration of Life will be held at a later date. Memorials are preferred to the Mower County Senior Center in Austin.