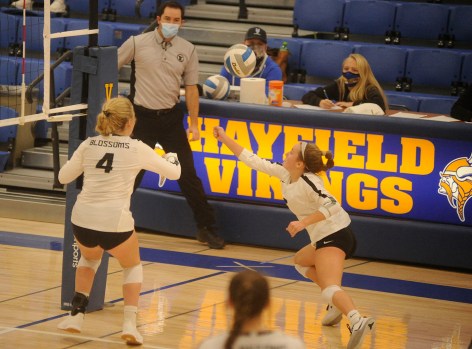 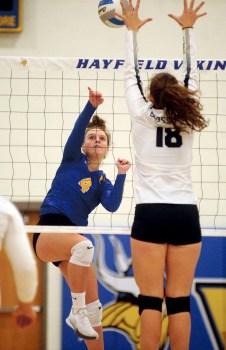 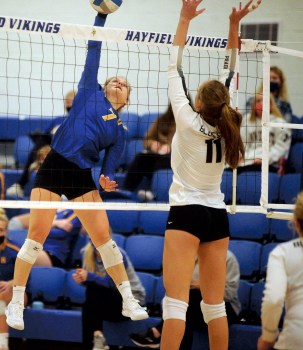 Hayfield’s Jenna Jacobsen goes up for a hit against Blooming Prairie in Hayfield Wednesday. Rocky Hulne/sports@austindailyherald.com 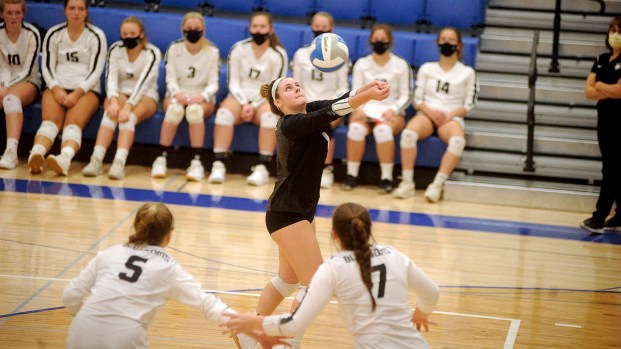 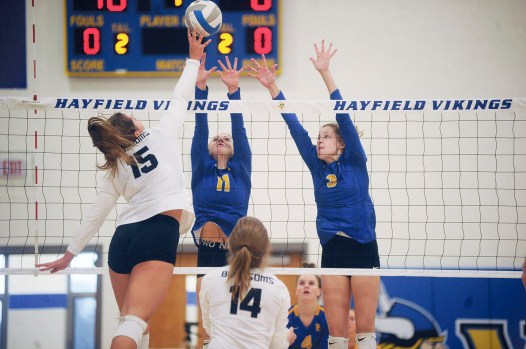 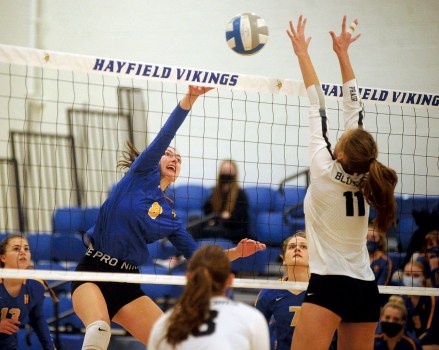 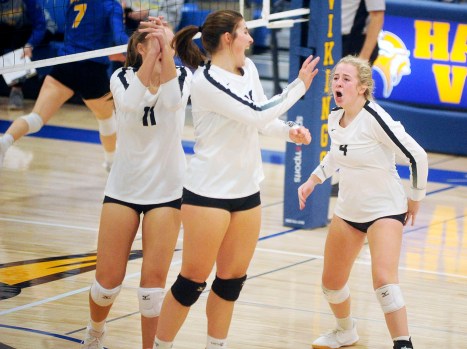 HAYFIELD – As an unprecedented fall season winds down, the Hayfield volleyball team just endured a 24-hour stretch that tested the team in many ways.

The Vikings lost a five-game battle with Medford Tuesday night, which they thought was their final match of the season, and then they bounced back and beat Blooming Prairie on short notice.

Hayfield won its final regular season home match of the season over Blooming Prairie by scores of 25-18, 27-25, 25-22 in a match that was set up late Tuesday night and played Wednesday afternoon.

BP (3-8 overall) pushed Hayfield to the wire in the last two games, but the Vikings (7-6 overall) kept their cool, even on very little physical and emotional rest. The volleyball season is now set to likely end without a Section 1A Tournament, as all prep sports will be put on hold for at least a month from Friday night.

The Blossoms filled the gym with a ton of energy, but it wasn’t enough to knock the Vikings off their game.

“We’re not a very loud team. We like to keep it calm and collected,” Young said. “When other teams start to get loud, we just say ‘we’re fine, it’s one point and we have to execute and play our game.'”

Young finished with eight kills, 17 set assists and 14 digs for the Vikings (7-6 overall).

“Last night after our game, we thought it was our last game and we were all crying. Then we found out we were going to play today,” Young said. “Getting another game was the best feeling in the world and now we get at least one more on Thursday.”

Trihus said she knew about the match four hours before it started, but she was pumped to get another chance to play with the Awesome Blossoms.

“This could be our last match, and even though I know I will have more matches (in college), I wanted to go out and play as hard as I could because you don’t want to look back at what could’ve been. You want to look back and be proud of what you did,” Trihus said. “Even though we lost tonight, I think we played really great and I’m not mad about it.”

Hayfield senior Jenna Jacobsen also had some late second game heroics as she put down back-to-back kills to push Hayfield ahead 22-17 and she added another kill to put her team up 23-20.

Hayfield’s Cait Hendrickson scored a kill that boosted Hayfield to a 20-17 lead in the final game after it was tied at 17.

BP’s front line held up against the Viking attack for portions of the first game and Sierra Larson put down a kill to bring BP within 23-18, but that was as close as the Awesome Blossoms got.

Hayfield sophomore finished with eight kills in the win and she put up 23 kills and five blocks in the Vikings’ wild 24-hour ride. She said Hayfield had to rely on all of its players to hold off an upstart BP squad.

“They get up and block and they kind of got us. I think our passing really helped us get points today,” Bauman said. “I’ve learned a lot (this year) from all of my teammates, especially Maryx (Young) and Jenna (Jacobsen).”

Hayfield’s last regular season match will be at Chatfield at 7:30 p.m. Thursday and BP is scheduled to finish its regular season when it hosts Waterville-Elysian-Morristown at 7:15 p.m. Friday.