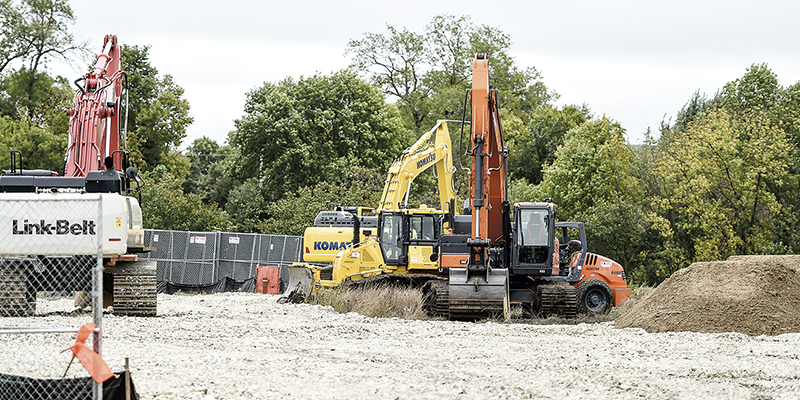 Machinery sits and waits for use at a site tagged for remediation at the corner of East Oakland Avenue and Fourth Street Southeast this past January. Eric Johnson/photodesk@austindaliyherald.com

Native prairie came back to life this year along Austin’s Cedar River one year after work ended to remove pollution mostly left behind by a gas-manufacturing plant that ceased operations there in the 1930s.

A 5-acre site along the river’s west side – just downstream from the Oakland Avenue East bridge – looks much different today compared to when it was surrounded by covered fencing for a few years as crews worked to remove polluted soil and sediment from the property. This included excavating a polluted river bottom several feet deep in the Cedar River State Water Trail.

With the cleanup, a section of riffles was created where the Cedar River now flows through rocks near the Austin Noon Lions pavilion and city trailhead parking lot. The western streambank now is protected with 300 tons of riprap rock, and a gravel path for public use cuts through the new prairie covering the old gas plant site.

This major effort was launched after volunteers in June 2017 with the Jay C. Hormel Nature Center’s annual river cleanup reported finding spots in the Cedar where it looked like motor oil flowing up from the riverbed. Those volunteers told Cedar River Watershed District staff, who notified the Minnesota Pollution Control Agency (MPCA), leading to the recent efforts.

Today, MPCA Commissioner Laura Bishop hosted an online event to thank all involved with cleaning up the old plant site.

“This cleanup is a great example of how remediation both restores Minnesota’s natural resources and creates new value for communities. This site, once polluted with potentially harmful substances, has been transformed into beautiful greenspace for the whole community to enjoy,” Commissioner Bishop said. “The project also demonstrates how partnerships are vital to protecting our environment: We have community members who spoke up; a business that took responsibility by demonstrating sound environmental stewardship; and a watershed district committed to improving the river.”

After the nature center volunteers’ report in 2017, the MPCA determined the Cedar River had contaminant levels below the threat to drinking water, suggesting the contaminated sediments were not affecting the river’s water quality but that cleanup efforts would further reduce any potential threat.

This past spring, a handful of yellow, cautionary signs were removed after being placed along the river in 2017 near the site by the Minnesota Energy Resources Corp. – which led the most-recent cleanup – as recommended by the MPCA. The signs warned of potential contamination from the gas plant and advised people to avoid contact with sediment or water along that river stretch.

Minnesota Energy Resources acquired the site in 2015 as part of its purchase of Interstate Power & Light Company’s natural gas facilities and properties.

Extensive testing and cleanup at the Austin site date back to 1991, with major remediation work starting in 2006 after buildings were removed there through the city’s flood-mitigation efforts that accelerated following the 2004 record flood. In that cleanup, crews removed 31,000 tons of contaminated soil and heat-treated the soil to destroy pollutants, which included contamination from coal tars, sludges, oils and other chemicals.

The most recent cleanup, which began in 2018, included removing more than 20,000 tons of contaminated soil from the site and replacing that with clean fill covered by topsoil. Minnesota Energy Resoures then planted an urban prairie that’s expected to mature and become self-sustaining in three to five years.

In the Cedar River, Minnesota Energy Resources did a two-phase remediation from 2018 to 2019 that removed 6,900 tons of contaminated sediment from the shoreline and river in two areas near the site. Clean, river backfill replaced the removed sediment.

“This project is just one example of our commitment to environmental stewardship and a cleaner future,” said Tom Rice, vice president of Minnesota Energy Resources. “We strive every day to make the communities where we live and serve a better place for everyone.”

Since May 2019, Minnesota Energy Resources has sampled groundwater from wells on the flood-prone site that used to host the former Eagles Club, a car dealership and other businesses acquired and removed after the 2004 flood.

During groundwater monitoring, the Cedar River also is checked for visible signs of pollution in the sediment-removal areas. No contamination has been reported to date.

Existing wells will continue to be used by Minnesota Energy Resources for groundwater monitoring into 2021 to evaluate the cleanup’s effectiveness, said Gary Krueger, a MPCA remediation division supervisor. With the cleanup, the company met the requirements of MPCA’s approved Response Action Plan, he said.

Most of the site’s pollution is tied to the Austin Gas Co. plant that manufactured gas from coal on the property from 1905 to 1935, mainly for cooking and heating water in Austin homes and businesses. The company, which also sold barrels of “gas house tar,” grew over the years, with its manufactured gas promoted as the “cheapest fuel,” with clear, steady heat.

By 1928, however, concerns with pollution from the gas plant – which then was owned by Interstate Gas Co. – led Austin citizens, including Hormel Foods leader Jay C. Hormel, to demand immediate action by the company to clean the river. Waste material from the gas plant was causing odors along the river that arose especially during the summer.

In 1932, an interstate, natural-gas pipeline was connected to Austin. This allowed for a switch from manufactured gas to natural gas, the last utility service added by the community owned Austin Utilities to its water and electrical services.

Three years later, Austin Utilities purchased Interstate Power’s gas-distribution system in the community. This added 3,000 new customers when the switch happened on Oct. 1, 1935, months before Interstate’s franchise with the city was set to expire.

Interstate sold its property along the Cedar River in the late 1940s to a local businessman, with some of its facilities then used by other businesses, including an implement dealer, auto body shop, gas station and cab company.