Our Opinion: Gach an example of hard work 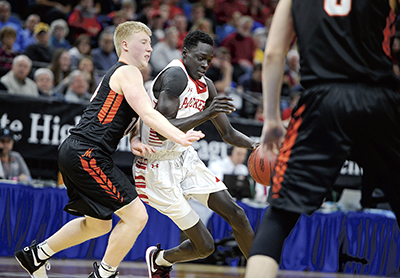 Austin’s Both Gach looks for room to move against the Marshall defense in the first half in the semifinals of the Minnesota Class AAA Boys State Basketball Tournament at Target Center in Minneapolis. Herald file photo

Many in Austin by now know that one of Austin’s own is currently on the University of Minnesota men’s basketball team and more than a few of you also know that he was a starter in Wednesday night’s game against Green Bay, scoring 14 points in the effort.

Both Gach, a standout for the Austin Packers, is making good on the hard work he’s put in over these past few years, moving from Packer Gym to Williams Arena.

He is giving basketball fans in Austin something to really get behind now when they tune in to a Gopher basketball game. Gach is source of pride for a community who watched him continue to help solidify the legacy of a basketball program along with a host of talented athletes who have passed through the confines of Packer Gym.

But Gach is more than an example of pride for Austin. He should be looked at as a role model for younger players making their way through the system.

Gach and so many other players coming through Kris Fadness’s program, didn’t just walk on to a court and start winning games. It’s time spent in the gym, time shooting the same shot over and over again and time working with coaches.

Gach put in the work necessary to get to this point. We hope kids taking to the court in Austin recognize this and put in the same kind of work ethic.

They may not reach Gach’s heights, whatever they may be, but the lessons that come along with this mentality are more than basketball. They are life lessons.