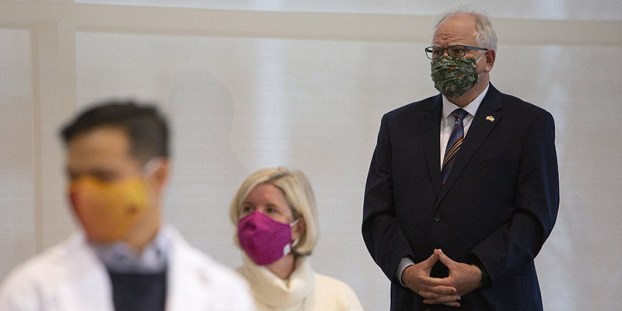 Gov. Tim Walz stands during a press conference with health care workers and state public health officials, in which speakers urged the public to take steps to combat the spread of COVID-19, on Monday in St. Paul.Christine T. Nguyen | MPR News

Gyms and fitness centers will also be closed for that duration, the source said.

Walz is expected to formally announce the new curbs in an address to Minnesotans at 6 p.m.

“The virus cares about none of those things we like to do, and it will simply bring death and destruction, overwhelming our health care system,” he said.

Minnesota’s COVID-19 numbers — its daily and cumulative tallies of infections, testing, hospitalization and death — are bad and getting worse.

A little more than halfway through the month, the state is fast approaching 100,000 new cases in November alone. That’s nearly half of the state’s total cases — 236,949 — since March.

Almost 500 people have died of COVID-19 in Minnesota this month, and the state is likely to have lost a total of 3,000 people to the disease since the beginning of the pandemic by the end of the week.

More than 1,600 people are in Minnesota hospitals now because of COVID-19, with more than 300 needing intensive care. The state’s hospitals, short on staff and capacity, are bracing themselves for what they expect to be a wave of new patients, new cases, new ICU admissions in the coming weeks, as people who have fallen ill during the recent surge get sicker.

And while statewide testing has expanded dramatically, the rate of testing is nowhere near the rate of new case growth.

All week, state officials have been pleading with Minnesotans not to gather with anyone outside their immediate household for Thanksgiving. They also asked college students to consider not going home for the holiday.

Wednesday, the state is expected to ask for more. Walz has promised any new rules the state imposes will be based on data, which will help target mitigation efforts.

Public health officials, for instance, have recently identified youth sports as an increasing source of COVID-19 transmission. They’ve said people are getting infected on the field and off, and they’re carrying the coronavirus with them into school buildings and other settings — raising risks for more than just those student athletes.

But in the spring, workers whose jobs were eliminated or furloughed were able to receive $600 in relief from the federal CARES Act, the economic stimulus bill enacted in March. Since then, that relief has expired, and this time around, impacts on the hospitality industry could be more financially painful.