Hurdling to the highest level 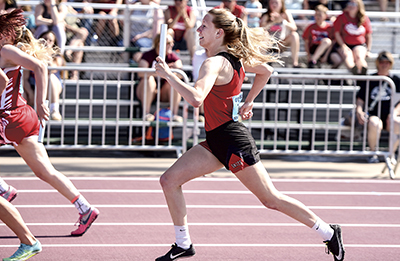 GMLOKS’ Hailey Hindt runs the second leg of the 4 x 200-meter relay in the preliminaries Friday at the Minnesota State Class A Track and Field Meet at Hamline University in St. Paul. Eric Johnson/photodesk@austindailyherald.com

The last time Grand Meadow senior Hailey Hindt competed for the Grand Meadow/LeRoy-Ostrander/Kingsland/Southland track and field team, she was a starstruck sophomore competing in her first Minnesota Class A State Meet.

Hindt found her drive to pursue a college running career that day and she’s now made her verbal commitment to run track and field at Division I University of Saint Thomas in St. Paul. 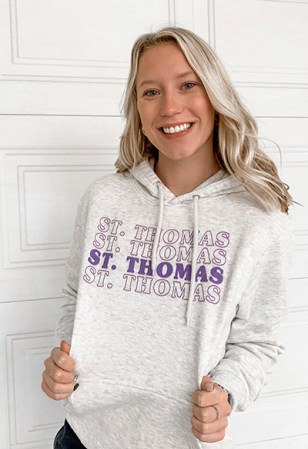 “I never really started focusing on track until after the state meet my sophomore year,” Hindt said. “Before that it was just running and I was kind of good at it, but then I started running all these good times and beating everyone.”

That 4 x 200 relay team, which also won a state title in 2018 without Hindt, had high hopes of winning a third straight title last spring, but that dream disappeared when the spring season was cancelled due to the COVID-19 pandmeic. Hindt and the team had been practicing for two weeks before the cancellation, which came as a shock to her and her teammates.

“We were all really sad and devastated, but I was ready to keep training,” Hindt said.

Having already visited the UST campus in October of 2019, Hindt made it a goal of hers to get out and run sprints and hurdles three to four times per week last spring. Hindt, who is also a standout hitter on the volleyball team for the Superlarks, is relieved and thrilled to have a college track and field career ahead of her, especially at a time when some schools have had to cut their programs and no schools are currently being allowed to bring in athletes for visits.

“It’s super exciting. I was lucky enough to visit before February (last year). You could tell the atmosphere at the campus was everyone being excited to move up to another level,” Hindt said. “It’s really nice to know that I have somewhere to go. The DI schools are in a dead period right now and that’s really hard for certain athletes. I’m thankful I met the coaches before everything got shut down.”