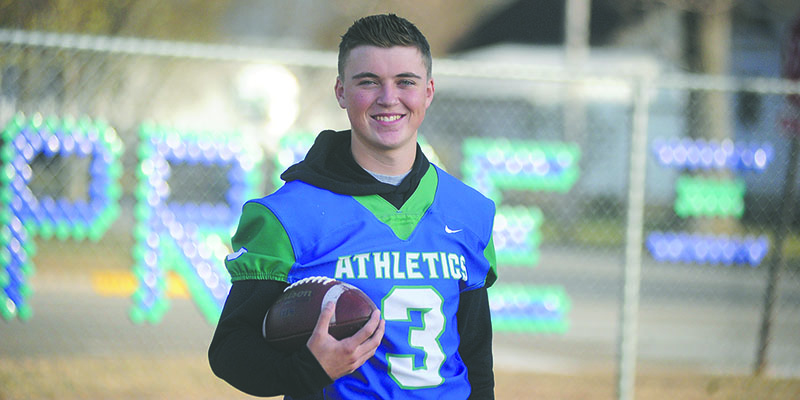 Lyle-Pacelli senior Cole Walter has stepped up at quarterback for the Athletics. Rocky Hulne/sports@austindailyherald.com

LYLE — Cole Walter has seen the plaque honoring his dad in the hallway at Lyle High School and he’s heard the stories of his dad’s days as a Lyle football player. 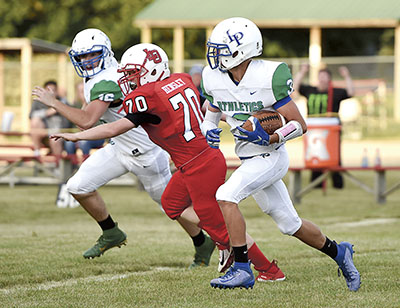 Lyle-Pacelli’s Cole Walter returns a kick-off for a touchdown against LeRoy-Ostarnder last year. Walter has now moved into the quarterback position for L-P. Herald file photo

Now he’s trying to mimic what his father, Brad, once did for Lyle as he is playing a big part in bringing the Lyle-Pacelli football program back to respectability. Brad was a standout running back for the Lions, graduating from Lyle in 1991. He took over as head coach of the L-P football team two years ago and turned to Cole at quarterback halfway through last season.

“He had a lot of success playing here and he won a lot of awards,” Cole said of his dad. “I’m trying to follow in his steps and be the best player that I can be.”

Cole turned into a dual threat quarterback for L-P (2-2 overall), which is in the middle of its winningest season since 2015. He has completed 48 percent of his passes for 641 yards and 5 TDs, and has 160 yards rushing and two TDs while averaging 6.1 yards per carry.

More importantly, Cole has emerged as a vocal leader for the Athletics and Brad said that he has served as coach on the field.

“It has been a great experience coaching my own son. Cole took his sophomore season off because he wasn’t into football. It was very hard because football is something I really enjoy, and knew Cole would excel at it,” Brad said. “We now have the opportunity to go over things daily and discuss situations and how we will take advantage of how we are being defended. Cole’s understanding is very high, and will get kids in the right spot on every play. I think I’m starting to see some of the enjoyment Cole has developed for the game like I had when I was playing.”

Cole said his passion for football has grown immensely over the past two seasons. He’s seen the Athletics grow from a squad that could barely field a team to a team that looks forward to competing on Friday nights.

“It’s been a total change. Coming in as a freshman without a JV team, I didn’t really get to play and football wasn’t really my favorite sport,” Cole said. “Then in my junior year, my dad got the (head coaching) job and our team had a lot of talent. It’s been a lot of fun.”

Cole took over as quarterback in the fourth game of the 2019 season. It was no small task as he replaced his classmate, Jed Nelson, who Brad considers one of the best quarterbacks in the area. Nelson has thrived at running back, while Cole has given the team a mobile play-maker who is always looking to keep the ball moving.

Cole also plays baseball and basketball for the Athletics, and his point guard mentality helps him out on the football field.

“I don’t really like to be selfish while playing basketball and I bring that mentality to quarterback. I like to get my teammates involved and give my teammates the best opportunity to be successful and help our team win,” Cole said. “Playing quarterback has been really different, because ever since youth football, Jed was our quarterback. When you think of our age group, you think of Jed as the quarterback. It was kind of uncomfortable right away, but now that we’ve gotten in the flow of it, it’s really nice. There’s a lot more pressure being the quarterback, because you have to know everybody’s role and you have to lead.”

Out of all the teams who were elated to get an opportunity to play football this year, the Athletics have been as pumped as anyone. L-P has a big senior class that has come a long way.

“We have a great senior class,” Brad said. “The game of football is as much a team sport as any I can think of, and to see the excitement these kids have together is priceless. We talk frequently about needing to enjoy every day of the season because you never know when it might end. These are moments the boys will share the rest of their lives. Hopefully they have more to experience.”