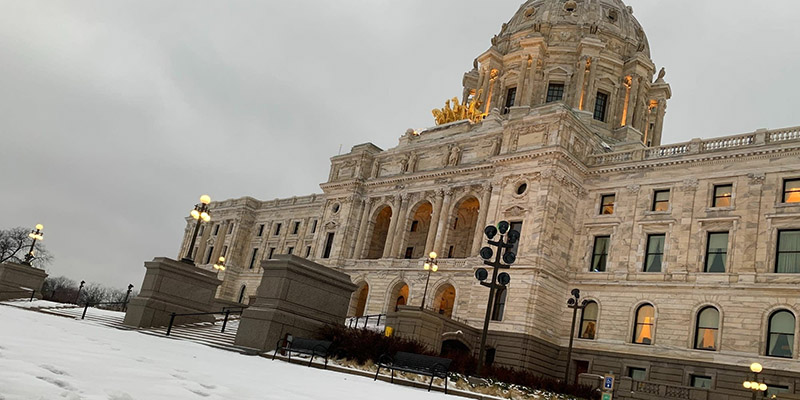 The Minnesota State Capitol in St. Paul in December 2018. The state Legislature on Thursday met for its sixth special session of the yearBrian Bakst | MPR News 2018

Amid Minnesota’s worsening coronavirus outbreak, the state Legislature met briefly Thursday for a special session where lawmakers largely avoided what’s become a routine but symbolic debate on whether to strip Gov. Tim Walz of his emergency authority to unilaterally manage the pandemic response.

The session came just hours after the state reported a record 7,228 new COVID-19 infections and another 39 deaths. In a Thursday morning meeting with the state’s Executive Council, Walz warned it will get worse before conditions improve.

“This is going to be very challenging. It’s going to be challenging for Minnesotans,” Walz said, adding that the state was on the edge of a period “that will probably test Minnesota maybe like no other time in our history.”

The sobering reality was apparent as the Republican-controlled Senate decided against pushing a resolution to revoke the peacetime emergency first declared in March. That vote has been taken in five prior special sessions, although the DFL-led House swatted away the companion measures.

“I think we’ve made it very clear that you don’t need emergency powers to deal with the virus. We’ve always said the virus is serious. We made sure we had PPE, we made sure that we were prepared with beds for an eventual surge,” Gazelka, R-East Gull Lake, said. “The surge is here. It’s absolutely serious. People need to pay attention to it. But we don’t think the governor has to do it himself. We prefer to work with him.”

One Republican senator, Torey Westrom of Elbow Lake, did rise prior to adjournment to lash out at Walz for a series of executive orders that restrict bar and restaurant hours, cap event sizes and urge people to avoid large gatherings even in their own homes.

“I do not stand here and do not believe we should continue supporting a governor who continues to abuse the emergency powers for a ninth month in a row,” Westrom said. “When will this end?”

In the House, Republicans tried but failed to advance a bill that would change which branch has the leverage over the length of executive orders, tipping it more in favor of the Legislature after a month has passed.

“The process the governor has used has effectively taken away some of our power. Our tools to bring our constituent concerns to St. Paul and to problem solve and vet solutions have effectively been locked away for eight months,” she said.

DFLers said now is not the time to make a shift, with the virus raging and political sniping in full swing over how to respond. Rep. Tina Liebling, of Rochester, said people need to make sacrifices big and small to get to the other side of the pandemic.

“I sure would like us at this point to pledge to each other that we will give Minnesotans the same message. That is — please, please take these directions seriously,” she said. “This is not about anybody wanting to cut off anybody’s freedom. The only thing we want is to cut off the freedom of that virus to go from person to person to person in an uncontrolled way.”

A separate motion to rescind the Walz emergency powers outright failed on a voice vote after failing to secure enough support for a recorded roll-call vote.

Senators did make one move of note: They replaced their presiding officer in an action meant to keep a slim Republican majority intact.

As President-elect Joe Biden fills out his Cabinet, there is some focus on Minnesota U.S. Sen. Amy Klobuchar as a possible appointee. If she leaves her seat, Walz would pick a replacement.

A potential selection of Lt. Gov. Peggy Flanagan would elevate the Minnesota Senate president into her vacant position.

Majority Republicans put state Sen. David Tomassoni, DFL-Chisholm, in the position that had been held by Republican state Sen. Jeremy Miller of Winona. The shuffle was approved by a 63-4 vote.

The Senate could just as easily replace Tomassoni if Klobuchar stays put. But the move ensures Republicans will have at least a one-seat majority when the 2021 session convenes in January.