An eye for detail: Bruin goalie escapes pressure with videography 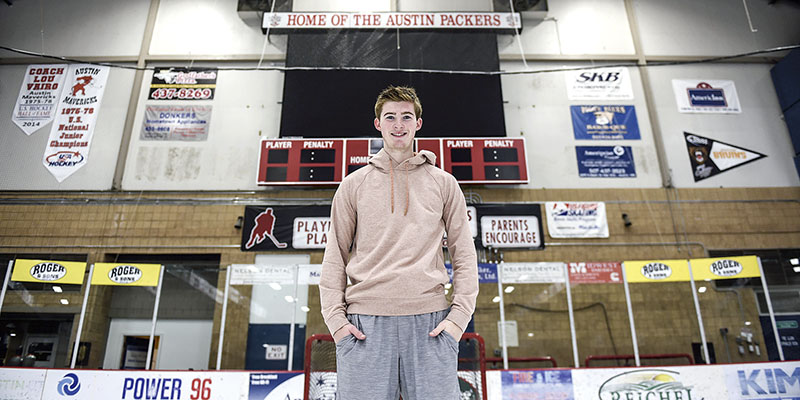 Tyler Shea’s primary duties with the Bruins is minding the crease, but the California native is also putting in time behind the camera, helping create promo videos for the team. Eric Johnson/photodesk@austindailyherald.com

Tyler Shea has moved into a starring role as the top goalie for the Austin Bruins this season, but he is just as comfortable behind the camera eye as he is in front of it.

Shea, who is from Stevenson Ranch, California, has given the Bruins an early lift between the pipes, while doubling as the Bruins’ resident videographer behind the scenes. Shea helped produce a recent hype video for the Bruins and worked on the Bruins Military Night video last year, conducting and filming interviews.

Shea grew up just 30 miles north of Los Angeles and mustered an interest in film production when he was in middle school. His favorite movie is “Miracle,” but his projects in California have involved promos, community projects and informative programming.

“When I was in high school, my friends and I did a lot of different stuff and our class put on a live TV show for the school every morning,” Shea said. “I use it as a way to kind of get my mind away from hockey. I take a lot of pride in it.” 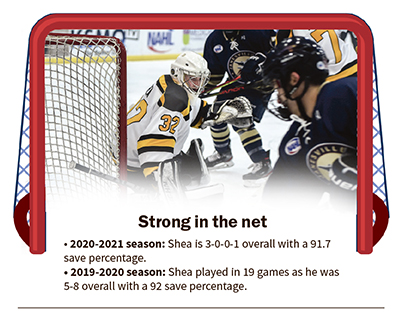 Shea was in for quite the culture shock when he moved from sunny, well-populated California to Austin, which experiences cold winters and a small-town feel. Staying involved in film has kept him grounded and has given him a chance to build up his portfolio.

For now, Shea’s primary focus is hockey, but he is considering studying film in college.

“I’m kind of following a dream and I’m taking it one day at a time to try and get to my end goal,” Shea said. “Austin has been a very great place to me and everyone has kind of taken me in. I’m looking to make a bigger impact on the team so we can make a run. I think we have the right group of guys in the room to do that.”

Austin head coach Steve Howard said that Shea’s contribution to the Bruins’ media team has been a welcome contribution.

“It’s amazing what kids can do with technology these days with Tik Tok, Instagram, Facebook and other social media,” Howard said. “They’re all dabbling in that stuff. Tyler is one of the guys on the team that can do that kind of stuff and hopefully he keeps improving at it. It was good that he helped out, because I don’t know if us old guys are very good at it.”

Shea spent much of last season in the shadow of Brett Miller, who is now playing hockey at Rensselaer Polytechnic Institute. This season will be a year for Shea to shine and he’s already seizing the opportunity.

“This is the year he’s supposed to run with it. He has confidence,” Howard said of Shea. “He’s been shelled before and there were nights when maybe (Brett) Miller wasn’t having a very good night and Tyler would have to go in there. Tyler’s a very focused kid who knows how to reset. We’re looking for him to get better and better as the season goes along.”

When Shea has his pads on and he’s in the net, he is required to survey and react to all of the action in front of him. When he’s holding a camera, he has a little bit more control of the action he’s focused on.

Either way, Shea has found a way to excel in hockey and video.

“If you’re an athlete, you know where to get the best angle. But being in the net is a little different than using a camera,” Shea said. “The camera is a good way to get away from it and get your mind off it when you’re away from the rink.”