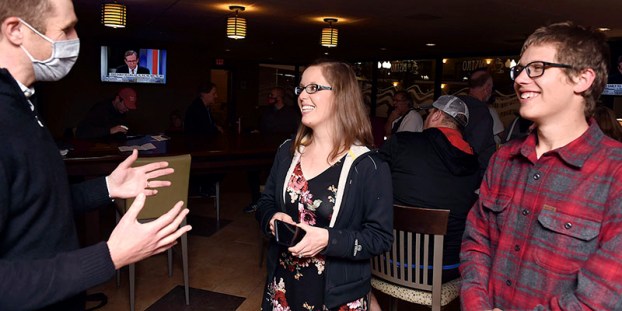 An amazing experience: Mueller, Dornink are loving the ride

It was a campaign unlike any other, but Patricia Mueller and Gene Dornink both felt like they did the Republican Party proud as they soaked up the final hours of Election Day at the Holiday Inn Tuesday night.

Mueller, an Austin High School teacher, who was running as a first time candidate against Rep. Jeanne Poppe in the State House of Representatives, District 27B, said it felt weird to not be campaigning, but she was pleased with what she learned as she spent the last 364 days making her case for office.

“It’s been a real amazing experience and we got to meet so many amazing people. We door knocked over 10,000 doors,” Mueller said. “We talked to as many people as we could. It was really good to hear what was in their hearts and see what matters to them.”

Mueller went into the race with a lot of energy and she’s gone out and campaigned every Saturday for the last five months.

“A lot of the advice we received wasn’t really relevant to us because of (COVID-19),” Mueller said. “Our race was definitely very heavy digitally. We were online quite a bit. It was about learning how to market yourself in a way that makes sense in 2020. We’re excited and we feel there’s a lot of momentum. We want to thank Rep. Poppe for a really good race.”

The union carpenter and father of 12 said he’s always considered himself an underdog, but he liked what he was able to do with the 2020 campaign.

“We’re excited. We’ve worked really hard and people are looking for something different,” Dornink said. “This race has been in the hands of the DFL for 18 years and they haven’t had a race. When we ran in 2016, we did really well. It shows that people are looking for something different. They spent a lot of money against me and they’re afraid of what I bring. I think it’s time for some fresh energy. People are tired of the same old, same old.”

Dornink said it was the pandemic that made it a little bit difficult to get momentum going. He wasn’t able to get in any parades with his family and he was only able to have one in-person forum with Sparks.

“We still worked hard and we got out and did some door knocks. Most people were happy to see us,” Dornink said. “It’s such a great opportunity to be able to run for office. I had a great time meeting people and I want to thank voters for being patient. We get to choose our leaders, we had the freedom to vote and it sounds like we had a really great turnout, which is great.”

Poppe optimistic after seeing good turnout in the process