‘A tough pill to swallow’ 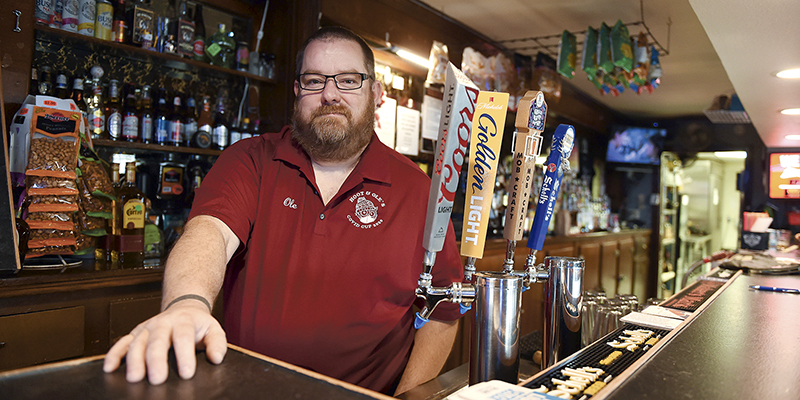 “Most bars and restaurants have done a great job responding to the pandemic and keeping their customers and employees safe,” Walz said in a press release Tuesday. “But this virus is spreading like wildfire, and every gathering place is now more dangerous than it was a month ago.”

Under the new restrictions, Minnesota bars and restaurants must stop serving at 10 p.m., though they will still be allowed to offer takeout and delivery service after 10 p.m. The new rules also ban sitting at the bar and activities that involve standing — such as pool, darts and dancing — because they encourage patrons to gather closely together.

“Between the revenue of the people having drinks and some food, that’s a big hit for a small place,” said Jeremy Olson, co-owner of Hoot & Ole’s and Judy’s Too in Austin. “There are other places in town that have darts and pool every night and that’s a giant hit to them.”

The new rules are aimed at young adults, ages 18 to 35, who are often carriers of the virus without showing symptoms and are among the primary spreaders in the state. Minnesota’s guidelines currently limit private social gatherings to 10 people in a home and 25 people outside. The new limit is 10 inside or outside.

For Olson, who says he is concerned about another possible shutdown, Walz’s new restrictions are a bit of an overreach.

“He’s telling us that 18 to 35 year olds are the problem and implies that restaurant and bar owners are not competent enough to do anything,” Olson said. “If we close at 10 p.m. and somebody wants to go out and have a party, the party is going to start sooner. Are they going to send police around to every house to check? It feels like we’re a bunch of little kids getting slapped by (Walz). We’re business owners trying to put food on our table, but they say we’re the problem.”

Adding to Olson’s frustration was Walz’s decision earlier in the pandemic to shut down smaller businesses while allowing larger stores to remain open.

“They’ve had record years while I spent a while not knowing where my next dollar was coming from,” he said. “Bills don’t stop and that’s what a lot of people don’t understand. The only thing that stops coming in is people because they aren’t allowed to.”

“Before COVID, we averaged about one party per week,” she said. “Since, we’ve probably had three small parties. We had a benefit scheduled for the 28th which will not be able to happen.”

Taylor said the rule mandating that serving must stop at 10 p.m. will likely only impact them on Saturdays, but not having people sitting at the bar will have a more significant impact.

“We have our afternoon crew that comes in and sits at the bar and we have Bingo on Saturdays where people like to sit at the bar,” she said. “For the most part, they’ve been practicing social distancing, so now they come in and sit at a table. What did not being able to sit at the bar prove?”

“We’re running right at 20 percent of gross sales that we had before COVID,” she continued. “It does have a large impact on our ability to pay the fixed cost. Thankfully we were able to get a small business loan, but that adds more cost on repaying that loan as well as the other loans we have.”

But bars and restaurants are not the only entities affected by the new restrictions. Weddings and funerals, which health officials say have also been significant sources of contagion in Minnesota, were capped at 50 people as of Nov. 7, and at 25 as of Dec. 11 to allow for a phase-in period.

Paul Worlein, director of Worlein Funeral Home, said he has been in contact with the Minnesota Funeral Directors Association and the Minnesota Department of Health on a daily basis for instructions on how to adapt to these restrictions as well as restrictions from earlier in the pandemic.

“We understand this is a continuation of what we’ve been doing,” he said. “There will be no receptions afterwards; we haven’t had those since March and that will continue. We have to conduct our services with social distancing and that will continue. We can have a maximum of so many people for services, but visitations are a bit of a question. Sometimes we get a large visitation and that is one of the questions we have for the state to answer.”

“Funeral homes in Minnesota have not gotten all of the specific word, but it’s going to continue as it has been since March,” he added. “We can’t say a whole lot. We get updates daily from the Department of Health and our state association, so it may change.”

As the cases rise, so does the frustration for local businesses affected by the restrictions.

“This is a very real disease,” Olson said. “I almost lost one of my very good friends to it and he’s not 90 years old or overweight, he’s not in the typical demographic that will pass away from it. He was in the hospital 10 days and said it was the worst thing he’s ever had. On the other side, if you look at the number who have recovered, it’s a staggering number. And they say they’re going to shut us down to save us. I’m here and I bust my tail to put out a good product and good environment for someone to come down and unwind. And every time I’m getting back on my feet, I get slapped by the government because they don’t think I know what I’m doing. It’s a tough pill to swallow. It’s a difficult time for business owners in Minnesota.”