A game of patience 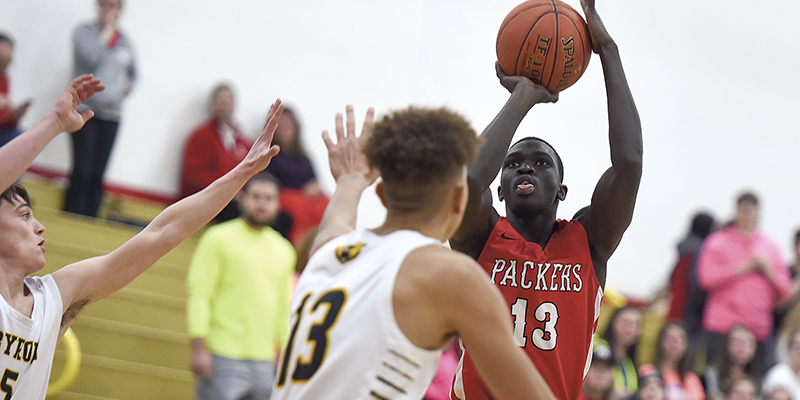 Austin’s Moses Idris shoots during the first half against Byron last year in the Section 1AAA semifinals in Packer Gym. It was the final game of the year after the COVID-19 pandemic brought on the premature end to the season. Herald file photo

The state of mind has changed drastically for three of Austin’s most successful sports programs. Instead of focusing on conference crowns or state berths, the Packer dance, boys basketball and girls basketball teams are just hoping to compete.

With the winter prep sports season being delayed until at least Dec. 18 and competitions likely not starting until January, athletes and coaches have had to remain patient. 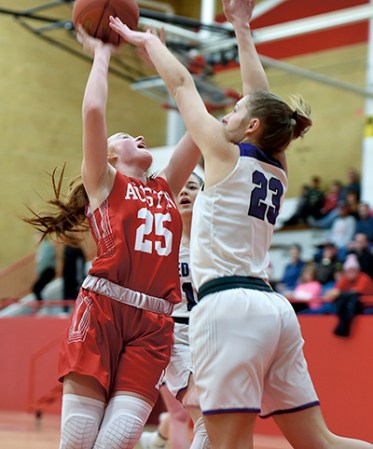 The Packer girls basketball team, which played in the state tournament in 2019, has a strong core of players on the roster this year, but the team has played in just one scrimmage and about a dozen open gym sessions since its season ended in a Section 1AAA semifinal loss last March. While players have been able to work out from driveways and outdoor courts, it has been extremely difficult for the Packers to prepare for the season – if there even is one.

Austin head coach Eric Zoske said he is going to start doing virtual check-ins in December and he’s telling his team to stay in shape in anticipation of a season he hopes will start in January.

“It’s been extremely frustrating because I love to spend time in the offseason preparing for the season and learning new things. This year I spent hours in coaching clinics and I love it, but then you wonder if you’re going to be able to put those things into place this year. There is a question and nobody has an answer to it,” Zoske said. “We had some things taken away, we were getting some things back and now we have nothing. I feel bad for our kids, because it’s a small opportunity in the course of their lives with high school sports and this is a random thing affecting it. I hope they have an opportunity to participate in the activity that they choose.”

The practice of waiting is something the Packer boys basketball team has become all too familiar with. The Packers, who played in six state tournaments in an eight-year stretch before last year was called off, had their dream of another state tourney vanquished when their season was cancelled just hours before they were supposed to play Albert Lea in the Section 1AAA Title game.

Packer players hit the outdoor courts over the summer, but Austin head coach Kris Fadness said the team has had just a handful of organized activities in the offseason.

“We didn’t do anything organized this fall. I just felt that wouldn’t be the right thing to do. I didn’t want the basketball team to be the reason that we shut down fall sports,” Fadness said. “It’s a tough situation for everyone right now. After seeing volleyball and football get cut short, we really are at the whim of the virus.”

Fadness was encouraged by the energy and turnout he saw for the open gyms that Austin was able to hold over the summer, but he feels bad for basketball players who are looking to get recruited and still haven’t found a school. Above all, he’s had to learn to change his focus.

“It’s not about winning conference titles or state championships this year,” Fadness said. “It’s really bizarre. But in the end, you just want to do what’s best for the kids.”

The COVID-19 pandemic has presented a major challenge to the  Austin Packer Dance Team, which took third in the state high kick in its 18th straight state appearance last year. APDT relies on the booming cheers of big crowds to energize its dance routines and the team also has a close bond that grows stronger when the team competes together on the floor.

In a normal year, the Packers would have already competed in their first dance meet, but instead of sharpening routines, Austin head coach Kayla Sellers is setting up zoom meetings as she seeks to keep the team virtually connected. During the team’s first ‘virtual’ practice, Sellers instructed the dancers to sprint, jog, and even dance outdoors.

“They got a kick out of the people stopping and looking at them like they were a little crazy,” Sellers said. “I want to keep them moving and connected to make sure they keep up with their mental health. Because we are so close, it makes it less of a challenge. They want to see each other and they want to try new things.”

Like every other team, APDT has no idea what awaits them. Sellers just wants them to give it their all.

“Wherever our last dance is, even if it’s in a gym by ourselves or in the living room, we want it to be our absolute best,” Sellers said. “We’re all in this together and we have to keep living safely. We’ve got to keep going.”