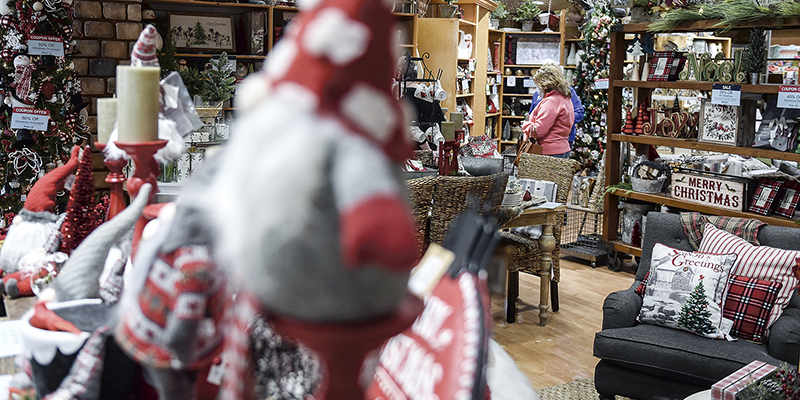 Black Friday took on a much different look this year for businesses and shoppers alike.

Seen as the busiest shopping day of the year, with millions of shoppers looking for the best deals, this year saw a surge to online shopping rather than in-store because of the COVID-19 pandemic.

Anna Bachstein of Owatonna decided to make a Black Friday shopping trip to Hobby Lobby in Austin so she could find what she needed for personal gifts from the heart.

Bachstein came to Hobby Lobby with her sister, Caroline Jones, also of Owatonna. For them, Black Friday shopping has been a lifelong tradition, one that COVID-19 was not about to stop.

“We’ve been doing Black Friday shopping together since we were kids,” Bachstein said of her and Jones. “We didn’t want to stop because of the pandemic.”

“We wanted to still have some sense of normalcy,” Jones added.

While both were determined to carry on their annual tradition in spite of the pandemic, they selected Austin’s Hobby Lobby location as a precaution.

“Normally we go to the Rochester (Hobby Lobby) location, but because of the pandemic, we thought it would be better to come to Austin since Austin is smaller than Rochester,” Jones said. “We felt it would be less crowded.”

“We definitely have seen fewer people in the store,” said Store Manager Jenny Legrid. “But we did have an incentive to shop online this year.”

It’s an adjustment Sterling has made that’s been similar to what businesses across the state have done.

At Sterling, that difference took the shape in how it offered its deals. In seasons prior, Sterling offered 50 percent off of four items. That changed to 40 percent, but 18 items in store qualified for that deal.

Despite some of the changes, Legrid felt like Friday was a little closer to normal, if not different.

“I think it’s been going good,” she said. “I know there were a lot less people than last year, but we don’t want a big crowd for the moment. It was a different Black Friday. It was definitely different.”

Michael Stoll and Eric Johnson contributed to this story