Born Jan. 3, 1927, in Portsmouth, Virginia, Richard Thomas Shea Jr. attended Virginia Polytechnic Institute before dropping out in 1944 to enlist in the Army. He served with the 53rd Constabulary Regiment in Nuremberg, Germany, during the post-World War II years, rising to the rank of staff sergeant.

In 1948, Shea took an appointment to the U.S. Military Academy at West Point. As a cadet, Shea ran cross country and won the European 1,500 and 5,000-meter championships. While at West Point, he set seven indoor and outdoor records in track and field. His indoor mile run of 4 minutes and 10 seconds and two-mile run of 9 minutes and 5.8 second remained records at West Point for over a decade; since then, only eight runners have recorded better run times. 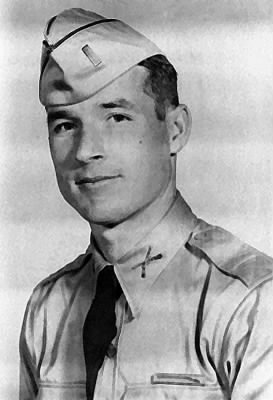 Shea graduated with the Class of 1952 and was offered the chance to run in the Olympics. With the U.S. involved in the Korean War, Shea declined the Olympics, choosing instead to accept his commission and enter active duty. By July 1953, he was a first lieutenant and the executive officer of Company A, 17th Infantry Regiment, Seventh Infantry Division.

In July 1953, the Seventh Division was manning defenses on a 300-meter hill near Sokkogae, a city in modern-day South Korea located along the border between modern-day North and South Korea. The position, dubbed “Pork Chop Hill” because of its resemblance to a pork chop, had been a key strategic site that changed hands between U.N. and Communist forces throughout the course of the war. American forces gained control of the hill after a vicious battle that lasted from April 16-18, 1953, which was followed by a lull in combat as armistice talks were being ironed out.

On the night of July 6, the Chinese People’s Volunteer Army (PVA) launched a major attack against Pork Chop Hill with a heavy concentration on Company A’s position. As the numerically superior PVA forces poured into the trenches, Shea volunteered to go to the most threatened area of the line. He organized a counterattack that resulted in hand-to–hand fighting; Shea personally killed two enemy soldiers with his trench knife. The move succeeded in blunting the PVA assault and drove them back.

The PVA reorganized and proceeded to launch multiple attacks upon Company A’s position. Throughout the fight, Shea moved along the position to inspire his men and aid in the defense. At dawn on July 7, the PVA made an all-out attempt to overrun the Americans. Shea met the attack with another counterattack and drove the PVA forces back.

On the afternoon of July 7, elements of Company G joined the defense. Company G had suffered heavy casualties during the fight; what remained was integrated into Company A.

Shea gathered 20 volunteers from this new force and launched another counterattack on the PVA. He was wounded during the fight, but refused to be evacuated and insisted on continuing to lead the charge. At one point in the attack, an enemy machine gun position pinned down the Americans. Shea charged the machine gun, firing his rifle, throwing grenades and killing the three-man crew.

Shea continued to lead his men in the defense through the morning of July 8, when the PVA launched another attack. Despite again being wounded, Shea refused evacuation and rallied his men for another counterattack. He was last seen fighting PVA troops in hand-to-hand combat before he was killed.

Shea is buried in Olive Branch Cemetery in Portsmouth.

Shea was inducted into the Virginia Sports Hall of Fame in 1987 and the U.S. Military Academy Hall of Fame in 2004. West Point’s outdoor track and field complex is named in his honor.