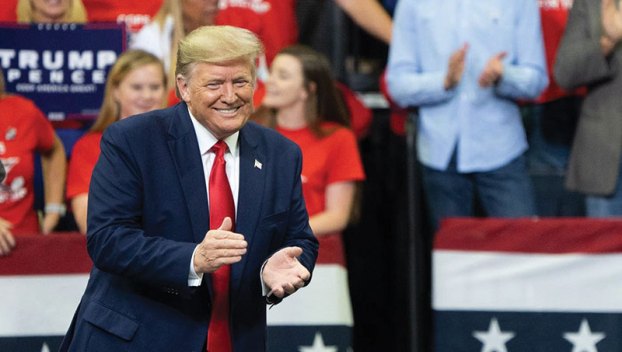 President Trump applauds his supporters as he takes the stage inside of the Target Center in Minneapolis last October. Evan Frost/MPR News

Trump steps back from Minnesota

A Republican presidential candidate hasn’t won the state since 1972, but Trump came close four years ago. Since then he has pledged to win here in 2020.

Polling averages show Democrat Joe Biden has maintained a statistically significant lead over Trump in Minnesota for weeks. And on a call earlier this week, senior Trump campaign advisor Jason Miller essentially acknowledged Minnesota is no longer the priority it once was.

“President Trump is aggressively campaigning in every state that he won in 2016,” Miller said.

“Minnesota could still be in play as a late breaker,” just as Minnesota almost broke for Trump in 2016, Miller added.

Looking at where candidates go and where they spend money is a good way to discern their strategy. The dynamics of his reelection campaign have forced Trump to play defense rather than expand his footprint into states he lost in 2016, including Minnesota.

“He can’t afford that right now,” said Todd Rapp, a DFL political analyst. “Because if he doesn’t win Pennsylvania and Michigan and North Carolina and Arizona, it’s not going to matter what he does in Minnesota.”

Earlier this year, the Trump campaign reserved millions of dollars in Minnesota ad time for a full blast of commercials in the stretch run. But since September, it’s been canceling planned ad buys. Public records show this week the campaign wiped out its TV ad presence entirely on major stations in Minnesota.

Trump has repeatedly said he would have won Minnesota if he had made just one more visit four years ago. But given the scramble to shore up support in states he carried in 2016, it’s not clear the president will be back in Minnesota before Nov. 3.

He has made several visits to hold rallies, including one in Duluth last month.

The Trump campaign also invested heavily in staff and organizing early in the campaign season in an effort to expand the Republican base of support.

Vera Alexander is part of that base. She lives in Isanti County where Trump won her vote in 2016 and the votes of nearly two-thirds of those who turned out in the county.

Alexander works as a server at the People’s Café in downtown Cambridge in the heart of Isanti County.

She’s better off because of Trump in part because the Republican tax cut put more money in her pocket, she said.

“We did make money and that’s what you want to hear, you know,” Alexander said.

Like some other Republican voters, Alexander said she intends to wait until Election Day to vote in person because she’s concerned about the security of mail-in ballots.

“We all feel very strongly that we have a chance to make history in Minnesota and flip our 10 electoral votes,” Carnahan said. “We’re spending  a lot of money in the state to make sure our candidates’ voices and messages are lifted up and we’re feeling very encouraged coming into the home stretch.”

As Republican leaders talk up their strength in Minnesota, their DFL counterparts are guardedly optimistic.

“We feel really buoyed by the position that we’re in,” said DFL Party Chair Ken Martin, although he is mindful of Trump’s unexpected rise to the presidency four years ago.

“We’re not taking anything for granted,” Martin said. “We’re going to run like we’re 20 points behind.”

Analysis: Debate is brief interlude of normalcy in 2020 race

WASHINGTON (AP) — The second and final presidential debate, it turns out, was actually a debate — a brief interlude... read more