This year’s Minn. school board races are competitive and more racially diverse 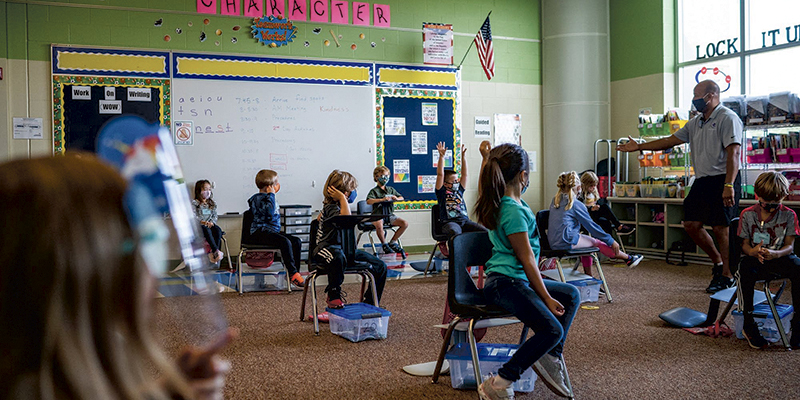 The tension over how Minnesota public school districts are handling education during the pandemic may be contributing to a lot of upheaval on school boards, resulting in competitive races across the state. Evan Frost | MPR News

Jess Garcia has never run for office before, but this year, at the age of 34, she decided it was time to get involved in her local school district. She’s on the ballot for Rochester Public Schools.

“The idea of politics for me has never been something until recently that I thought I would get into officially,” Garcia said. “I chose a local office because I really want to make a difference in my direct community.”

Garcia has put forward a platform focused on student mental health, cyber safety and equity She said her priorities stem from her own experience as a clinical psychologist and as a gay Latina woman who has felt underrepresented for much of her life.

Since she’s started to run for office, she said, a number of educators and parents of color have reached out to her in hopes that she could somehow represent their interests.

“They’ve been waiting so long for choices and decisions to be made that positively impact them instead of otherwise,” Garcia said. “It’s pervasive throughout the system. We need to tackle this to make sure it gets taken care of because people’s physical and mental health and livelihood is on the line.”

Garcia is one of an unusually high number of people running for a school board seat this year in Minnesota. Out of 332 public school districts, 301 are also holding elections to fill board seats. According to Greg Abbott, the communications director for the Minnesota School Boards Association, many of those elections are more competitive than usual.

In some places, like Sleepy Eye and Carlton, however, there are elections, but not enough candidates have stepped forward to put their names on the ballot.

While there are a plethora of candidates on ballots, Abbott said there are fewer questions on the ballot. There are only 33 operating levies that districts are requesting voter approval on to get more money into classrooms. Abbott said that’s the lowest it’s been in 20 years. When it comes to capital project levies, there are only 12 — down from anywhere from 30 to 65 in recent years. Most of them are capital project levies for technology.

How the pandemic is motivating candidates

The elections come as more than 80 percent of Minnesota K-12 students have been forced into distance or part-time distance learning because of the coronavirus. Students of color are nearly three times as likely to be in distance learning, compared to white students.

According to Abbott, the tension over how districts are handling education during the pandemic may be contributing to a lot of upheaval on school boards, including record numbers of board members resigning — at least 12 in just the first weeks of the academic year.

In Rochester, Garcia is challenging incumbent Mark Schleusner and is one of six vying for seats on her district’s board. She said the campaign has been much more intense than she’d expected. The vast majority of calls and emails she gets about her run are about how she would handle various pandemic-related issues as a district leader.

“It’s at least 85-plus percent,” Garcia said. “The people that are reaching out … about COVID and how are we going to get kids back in school, or don’t let them go back to school. I think it’s just been like a flood of text or emails or social media.”

Garcia’s opponent, Schleusner, said his platform also recognizes the importance of tackling Rochester’s education disparities, but has more of an emphasis on finance so the district “can afford to tackle problems.”

It’s not just that there are high numbers of people running for school board. This year, the field of candidates is more racially and ethnically diverse than it’s ever been.

“It’s absolutely a record because from the time I came onto the board in 2002 in Minnesota, across the metro and certainly across the state, the presence of people of color on local school boards was scant,” Bassett said. “As time has gone by, I’ve just witnessed that there’s no presence.”

Students of color make up just over one-third of Minnesota’s public school enrollment, but as recently as 2017, only three percent of district board members were people of color.

Bassett and Sabrie, who are both running for reelection in their districts, said that’s a problem.

“Representation really matters. Reflecting the student population and families is really critical and it’s part of one of the main issues that impacts education outcomes,” Sabrie said. “There’s not proportional representation in Minnesota … which has one of the biggest if not the biggest achievement gaps based on race and income.”

Sabrie is hoping to be reelected in Mankato. But he said it’s not enough to just have one token person of color on a board.

He thinks the high number of diverse candidates this year is part of the same trends that fueled protests over the killing of George Floyd this summer. He hopes it will lead to more people of color in positions to right Minnesota’s deeply entrenched education inequalities.

“Mr. Floyd’s killing — that touched the entire globe in terms of race relations. That has to be a contributing factor that people are feeling empowered that you really have to do the change that you want to happen … you can’t just talk about it,” Sabrie said. “We found human connection through that tragedy … they finally recognized that there’s a glaring inequity that exists in our systems everywhere and now we want to do something about it.”

Helen Bassett, who’s running to keep her seat on the Robbinsdale school board, also thinks there’s a new sense of urgency to elections this year.

“When you add COVID into it…what really stands out to me is the importance of having everyone in the community willing to help,” Bassett said. “Foundationally, we’re trying to preserve and lift up public education for all children, in doing that we need to have the full community continue to see that children who don’t look like them are still part of the ‘all children.’”

In Rochester, Garcia also said that her run for school board feels more urgent than she expected.

“I was seeing the world weighing really heavy on everyone and I thought, this is just the time. I just need to do this,” Garcia said. “Then when the George Floyd murder happened, then that just sort of flipped on the switch of, you might be feeling discouraged because COVID is making this campaign something you don’t understand, but it’s time. You need to do this.”