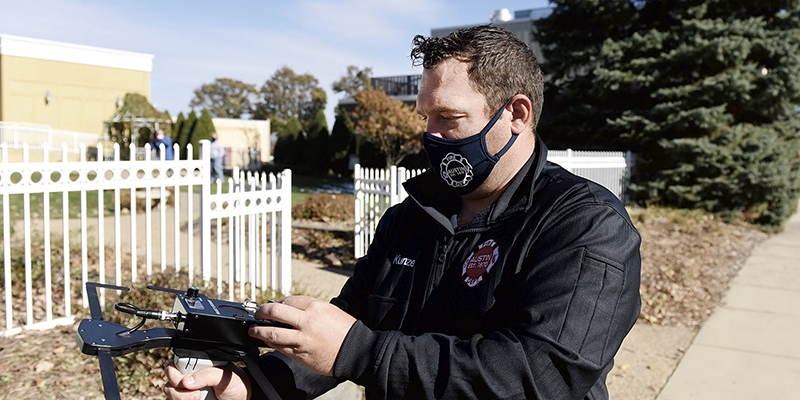 Austin firefighter Josh Kunze uses a Project Lifesaver tractor during training at the Hormel Historic Home Wednesday AFD, along with the Austin Police Department, are joining with the Mower County Sheriff’s Department to further learn how to use the technology. Photos by Eric Johnson/photodesk@austindailyherald.com

Those families with autistic children or relatives suffering from Alzheimer’s and dementia know the fears and dangers associated with them.

The fears of walking away and going missing is one of those concerns, but there is a technology available to help reduce the time it takes to find loved ones.

Project Lifesaver International is a tracking technology that gives emergency responders a leg up when tracking these high risk individuals.

Those at risk are fitted with a transmitter that can be tracked through the Project Lifesaver International locator. The technology pairs families with emergency responders. 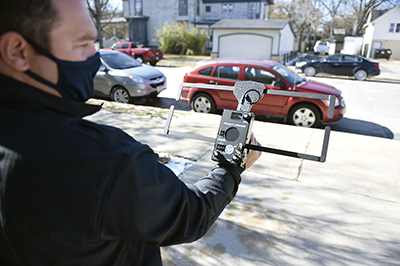 Kunze showing off the technology that can help save a life. Eric Johnson/photodesk@austindailyherald.com

“Once you get to know the program, it’s unbelievable how it changes people’s lives,” said Sara McCormick, a deputy sheriff with the County of Wood Sheriff’s Department in Wisconsin. “It’s one more thing we can do as county helpers to keep those people safe.”

McCormick was in Austin Tuesday and Wednesday to train members of the Mower County Sheriff’s Department, Austin Fire Department and Austin Police Department.

Clients to the program are fitted with a wrist band and given a specific frequency that is unique to the person wearing the transmitter. The moment a person goes missing, the family calls 911.

Agencies will commence a search at the last known location with the tracker, which will emit a chirping sound when it comes within range of the wrist band.

As the signal is refined and becomes stronger, the location can be narrowed. This becomes exponentially more effective when multiple agencies become involved using the same equipment.

Currently, the Mower County Sheriff’s Department is the only agency within the county with two devices, but with the inclusion of AFD and APD members taking part in the training, the devices can now be split up to help narrow the tracking fields.

“Typically, more often than not, the Austin Fire Department is usually the end link of the chain and that’s usually a bad end of the day,” said Austin firefighter Josh Kunze. “This puts us into the search and rescue portion.”

A major advantage to the program is how it can be used in different jurisdictions. Project Lifesaver International is present in all 50 states and all devices can work with all transmitters.

“If a client here in Austin came to our jurisdiction, all we would need is for the caregiver to call 911 and that activates us as searchers,” McCormick said.

While there is technology that can be used for location through cell phone technology, Mower County Sheriff Steve Sandvik said Project Lifesaver has some distinct advantages including a fear of losing signals.

“It’s easy to say you have a cell phone transmitter, but so many times people with these conditions end up in areas where there is no coverage,” Sandvik said.

When those that are lost wander into those areas, the danger intensifies.

“Many of them head to water for some reason and there’s a huge concern they will slip and fall in the water and not be found until it’s too late,” he said. “This technology still has proven to be a huge value for those who may wander or run.”

A drawback to the program is cost for many agencies and that includes the cost of upkeep. Currently, the sheriff’s department is in a hybrid program. In this plan, families will have new batteries shipped to them and it’s up to the families to do the replacing.

But so far, the value is making the investment worthwhile, especially with Austin responders getting on board.

“It’s something where we feel important to do everything we can to protect our community,” Sandvik said. “We are really excited we have this new partnership.”

PHOTOS: The science of pumpkin dropping