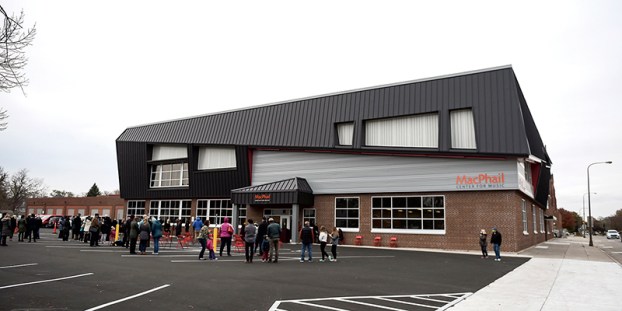 People wait outside for the start of festivities celebrating the MacPhail Center for Music’s open house Monday night. Eric Johnson/photodesk@austindailyherald.com

Our opinion: Music has a future

Good things happen when good people come together for a common purpose and you don’t have to look any further than the new MacPhail Center for Music as a great example of this.

Sitting across from Austin High School, MacPhail’s new home is a renovated version of the Austin Public Schools Districts’ annex building. A striking design on the outside is a first look to the future of music education inside.

The space is not only home to MacPhail; students from Austin High School will also enjoy the state-of-the-art facility that will only enhance the strong musical tradition the school has built, and that stretches back for years.

But to get to this point, a unique partnership had to be formed between the district, MacPhail and The Hormel Foundation.

The $14.5 million structure was funded by $8.7 million from the Foundation, with the rest being picked up by the school district.

Both sides of this show a continuing dedication to education and music in Austin, and that is only enhanced by working with MacPhail, who itself has shown a dedication to Austin.

At one point, MacPhail was looking at going to Rochester, but once in Austin the music institute from the Twin Cities went all in and has continued to help grow its only satellite location outside of the Metro.

Not only that, but it’s the only known collaboration in the nation between an independent music institutions like MacPhail and a school district.

Ultimately, our community’s children are the benefactors of all of this hard work. Music has played a central part in Austin for years through the schools, the Austin Symphony Orchestra, the Austin Big Band and the Paramount Theatre, just to name a few.

The work on display resulting in such a beautiful building is a verification that this support toward music and music education will continue for years to come, enriching our community.

Many thanks to all the people who took part in this effort from MacPhail, The Hormel Foundation, Austin Public Schools all the way through to those that built this new structure and the teachers within — both MacPhail and AHS.

We can’t wait to hear the sweet music coming from within those walls and we hope that this work will be a symbol for all of those wishing to further enhance Austin in the arts.

Holly Johnson: HHH is getting closer to the holiday season

I know it’s still October, but we are only four weeks away from the beginning of the annual Hormel Historic... read more