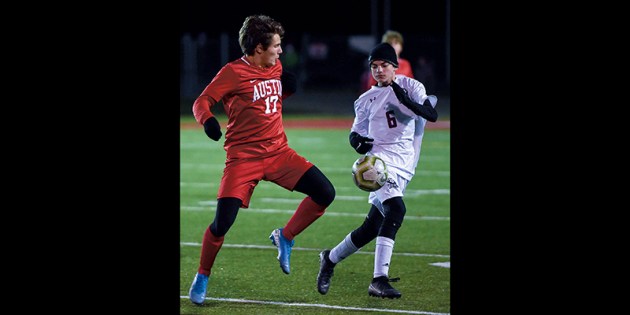 Austin’s Joe Ewing jumps in to play the ball in front of PI-ZM’s Christopher Tree during the first half of the team’s semifinal match-up Monday night at Art Hass Stadium. Eric Johnson/photodesk@austindailyherald.com 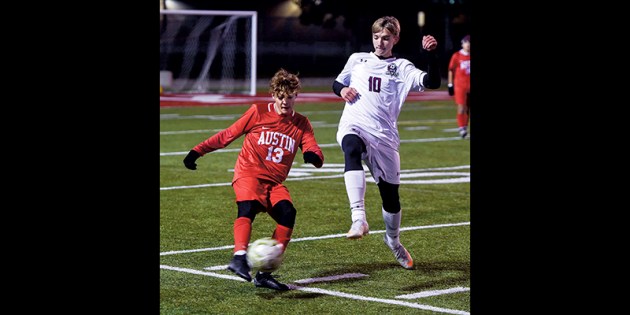 Austin’s Aiden Martinez kicks the ball away from PI-ZM’s Cole Ayres during the first half of the team’s semifinal match-up Monday night at Art Hass Stadium. Eric Johnson/photodesk@austindailyherald.com 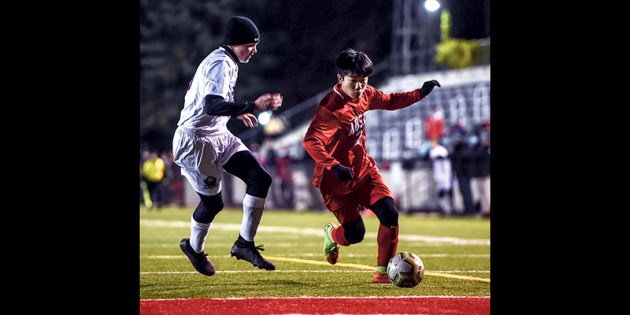 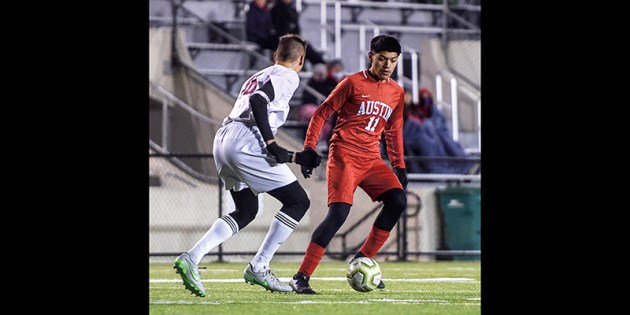 Austin’s Jose Valladares manuevers the ball early in the first half of the Packers semifinal game against PI-ZM Monday night at Art Hass Stadium. Eric Johnson/photodesk@austindailyherald.com 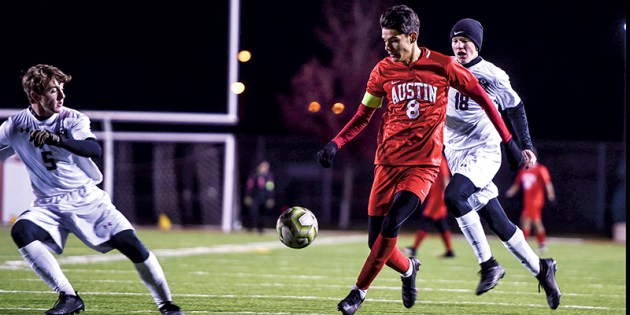 Austin’s Andres Garcia gears up for a shot in the first half against PI-ZM in the team’s semifinal matchup at Art Hass Stadium. Herald File Photo

Austin senior Henry Tolbert has come a long way since 2015, when he arrived in Minnesota as an immigrant from Liberia.

Tolbert, who was named a Minnesota Mr. Soccer finalist on Monday, showed why he was worthy of that accolade as he scored three goals and dished out an assist for the Packers, who toppled Pine Island/Zumbrota-Mazeppa 9-0 in a Section 1A semifinal in Art Hass Stadium Monday night.

Tolbert sat out for the final 32 minutes of Austin’s quarterfinal win over Winona with a yellow card last week, but he came out on fire Monday, blasting a 15-yard shot to make it 1-0, 10 minutes into the game before scoring again in the second half to make it 7-0.

Tolbert, who has 24 goals and 11 assists on the season is one of the five Minnesota Mr. Soccer finalists for Class A, along with Keegan Chastey of Duluth Denfeld, Keegan James of Blake, Miguel Leon Alvarado of Richfield and Nolan Pratumwon of Mahtomedi. Tolbert is the second Packer to be a top five nominee as Austin grad Kevin Ortiz also received that honor.

“It means a lot, but it’s a whole team award to me,” Tolbert said. “All of these guys have helped me in so many ways and they’ve given me the opportunity to score.”

Austin’s Henry Tolbert turns to the net on a run during the first half against Winona in the Section 1A Tournament Thursday night at Art Hass Stadium. Herald File Photo

Tolbert was a seventh grader when he arrived in Austin and while he spoke English in Liberia, he had a thick accent and was a little overwhelmed by his new life. He spent his first two years at Ellis Middle School without playing a single sport.

“I didn’t really know anyone,” Tolbert said. “I just went to school and then I went home.”

Tolbert warmed up to the idea of playing a sport in his freshman year, even though his dad actually wanted him to play football for the Packers. But it was the influence of his older brother Elton and Austin grad OJ Cham that drew Tolbert back to soccer, a sport he had learned to play while living in Liberia

Tolbert now hopes to play college soccer as the sport has helped level him as he has adjusted to a lot of new things.

“My life has changed a lot,” Tolbert said. “I miss a lot of family back home and those are people I grew up with. I had to leave them behind. It was a big change.”

Austin senior Jose Valladeres remembers the first time he saw Tolbert play. Valladeres was a ninth grade C squad player who was a ball boy during varsity games when Tolbert caught his eye.

“Right away, I knew Henry was going to be something big,” Valladares said.  “We don’t really have to get him involved. He gets involved from anywhere. He’s really quick.”

Valladeres has emerged as a big-time play-maker for the Packers this season as he has set up Tolbert and fellow senior Andres Garcia for a good portion of their goals.

“You kind of study them over the years and you look to see where they want the ball. That’s something I’ve been paying attention to a lot,” Valladeres said. “Tonight was exciting. We came out ready to play. We knew this was our last game at home and we had to give it our all.”

The Packers (12-0-1 overall) shared the wealth throughout the night as six different players scored. Valladeres fired in a shot from 30-yards out to make it 2-0, Gree Ha tipped in a loose ball to make it 3-0 and Joe Ewing knocked in a header to make it 4-0.

Garcia scored his 30th goal of the year when he knocked one in from nearby to make it 5-0 right before the half. Garcia, who scored goal No. 31 on the season with 24 minutes left in the game, had a few first half looks denied on great saves by Jason Ryan.

Aidan Martinez scored off a deflection to make it 6-0 early in the second half.

Casey Berg had three saves in the win for the Packers.

Austin will now play No. 2 seed Dover-Eyota (14-0 overall) in the Section 1A title game in Saint Charles at 7 p.m. tonight.

That game will be the final contest of the season for the Packers, who have won three straight Section 1A titles.

The Packers are ranked No. 2 in the state, with Breck holding down the No. 1 spot.

“We didn’t know how far into the season we were going to get and we didn’t know if we were going to have a section tournament,” Austin head coach Jens Levisen said. “We’ve had to play each game like it’s our last one. We have to show up and play like we’re capable of playing. That’s going to be it and there’s no holding anything back.”