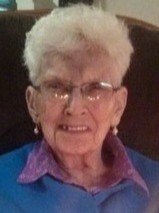 Kathleen A. Guyette, 95 of Austin, Minnesota, passed away at the Mayo Clinic Health System-Austin on Thursday, October 22, 2020.

Kathleen Ann was born on October 1, 1925 in Fayette County, Iowa to Earl and Anna (McCue) McCunniff. At the age of 2 Kathleen became hearing impaired. She received her formal education from the Iowa School for Deaf. While attending an event at the Minnesota School for the Deaf in Faribault, Kathleen met her future husband Jack Edward Guyette, Jr.

Kathleen and Jack resided in Austin and raised their 5 children. They later divorced. She then met Aven Speer and enjoyed 25 years together in Agency, Iowa. Following Aven’s death, Kathleen returned to Austin to be near her sons and grandchildren. At the center of her life was her devotion to her family.