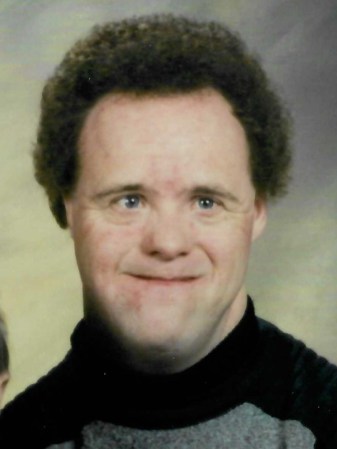 John David Mullenmeister, 58 of Austin, Minnesota, has joined the angels in Heaven. John passed away on Wednesday, October 14, 2020 surrounded by his loving caregivers at his foster home in Brownsdale, Minnesota.

From his father, Harold: Our special gift John was born April 5, 1962 in Austin, Minnesota. My wife Jeanette and I were not aware that God had gifted us with #3 son with Downs Syndrome until his 6 week check-up. We were told we were blessed with a special needs son. What we did not know was what a special gift he was to our entire family. His mother often said; “those of us that act and look different are really much the same”. Our mission was to teach him right from wrong. But in this journey he taught the family about caring, forgiveness, support, and how not to sweat the small stuff. What a guy! He was always there for us. John attended Austin Public Schools, and then worked with the Cedar Valley program in Austin. So much more should be written about his life journey and what he did for his family. He will not fade into the sunset. John will always be there for us; the cornerstone of the Mully Family – Forever! From his brother, Tom: It’s hard for me to put into words what my brother John meant to me. He was an inspiration! He represented all that was “good” in life. He was brave, polite, caring, forgiving, and kind. If ever you were down, some time spent with Johnny would pick you right back up again. He had a way of bringing out the best in people and many times brought out the best in me. People referred to him as “special”, but it was he who made us special, by getting to know him. I treasured our time together, especially our trip to Chicago (and his first time flying). John was a great companion, brother, and friend! He is a champ! He is super! From his brother, Mike (and Pam): John, despite his challenges, lived a full life. He worked, travelled, danced, and thoroughly enjoyed himself. He taught us about happiness, relationships, and what is important in life. John liked music, and Elvis was his favorite! The lyrics to Bruce Springsteen’s Terry’s Song, are appropriate: “Well they built the Titanic to be one of a kind, but many ships have ruled the seas. They built the Eiffel Tower to stand alone, but they could build another if they please. Taj Mahal, the pyramids of Egypt are unique I suppose, but when they built you brother, they broke the mold”. From his brother, Bill (and Angie): It was the way that Johnny approached life, friendships, and family that made him special. He valued friendships and his terms were pretty easy – a smile, a hug, sharing a meal and sharing a memory. Johnny was everyone’s buddy and his friendship contained no judgments. He loved social gatherings, trips to see his grandparents, the 4th of July picnic in Owatonna, Christmas Eve, and weddings. Johnny loved to cut a rug and without question has the best dance moves of any Mully! Johnny loved spending time with his aunts, uncles, and cousins. He loved the county fair, the Tilt-A-Whirl, a cold mug of A&W Root Beer, and some Tom Thumb donuts. He also loved birthdays – not just his birthday, but everyone’s birthday. There was nobody more fun to watch than Johnny ripping open his presents with such joy. Johnny was a great brother. Being the two youngest, we spent a lot of time together. He was faster and stronger, and more athletic than people thought. He more than held his own in our backyard football games with friends. Believe me, the defense was none to happy when Johnny got the handoff in the backfield and they had the chore of bringing him down. We played driveway horse and pig, rode bikes together, and watched a lot of TV. Johnny loved daytime and nighttime soaps, the Walton’s, and especially All-Star Wrestling (he rarely missed an episode). We also played cards like Uno and War. Johnny was a great son. He was always there for Dad; to give a backrub after a long workday, to shovel or ice chip the driveway, to carry in groceries, and to deliver his after-dinner beers. They were partners, buddies, and managers, and they made a lot of deals over the years. Johnny even inherited Dad’s strong work ethic and worked many jobs where he achieved many “worker of the week” titles. Johnny and Mom were attached at the hip. Mom was rarely seen without Johnny at her side. They were confidants, best friends, and travel partners. Johnny loved to go to new places and try new things. They made annual trips to see my family, and he loved visiting with his nieces and nephews. We have many special memories of Johnny’s visits. As much as I miss my brother, I know he is going to be back alongside Mom. What a special bond they shared. So Johnny, it is with a smile for all the amazing times and memories that I say goodbye to someone who earned the label “Special” in all the right ways. I miss you so much brother! From his aunt, Doris: John Mullenmeister, a gift from God to your family, to me and caregivers Stacy and Stephanie. You were dearly loved John. I had the privilege of babysitting you when your parents went away for any length of time. They trusted you in my care. It was a joy to have you around. You’ll always have a special place in my heart. We were very fortunate to have you around even though the time wasn’t long enough. You are in a special place now called Heaven. We will miss you John.

A memorial service will be held at 12:30 p.m. on October 31st (Saturday) at Clasen-Jordan Mortuary with Father James Steffes officiating. Interment will follow at Calvary Cemetery. Visitation will be held from 11:00 a.m. to 12:30 p.m. prior to the service.