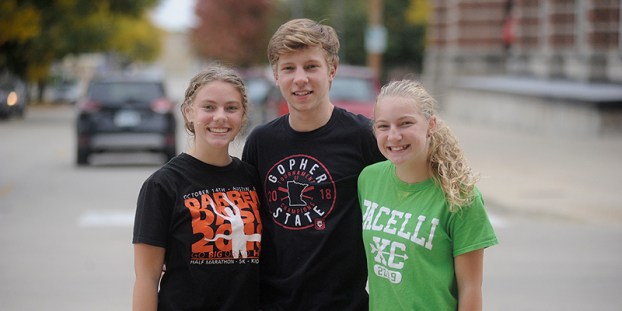 Pacelli students and siblings Kendahl Lewis, Jayden Lewis and Lexi Lewis have built a bond through running that has helped them honor their father Darren, who passed away nine years ago. Rocky Hulne/sports@austindailyherald.com

Fueled by Family: Lewis siblings run with purpose for Pacelli

Running can serve as therapy, provide discipline or serve out a sense of accomplishment.

For the Lewis siblings of Pacelli Catholic School, running does all that and more. It’s a way of life they were born into and it is a tribute to the memory of their father Darren, who passed away nine years ago.

Jayden, a senior, still hears the comparisons when he’s out in town. Someone who knew Darren will approach Jayden and tell him he looks just like his dad. On the cross country course, Jayden does his best to match that comparison as he is always pushing himself to get faster and run harder.

Jayden, who is also active in football, basketball and baseball for Lyle-Pacelli, is wrapping up his final season with the Shamrocks and it will be his last season as a teammate to his younger sisters, Kendahl and Lexi Lewis.

Jayden, Kendahl and Lexi have one more sibling who is in elementary school and they are also cousins of Austin grad Abby Lewis, who competed in five state cross country tournaments for the Packers.

Kendahl, a sophomore, has found Jayden to be a role model for her in running.

“Jayden is a great person to look up to in running because he has determination. I really look up to him,” she said. “He’s taught me that you can always push yourself a little more.”

It has been nearly a decade since Darren, who ran at Minnesota State University, passed away, but Kendahl still has memories of cheering for him at races. She also recalls how he stayed active through long bike rides and trips to the Jay C. Hormel Nature Center.

“Our dad was a really amazing runner and I think that’s why all of us got into running,” Kendahl said. “We figured the best way to remember him was to do something that he loved and was very passionate about. I think we all kind of share that passion for it.”

Lexi has emerged as one of Pacelli’s top girls’ runners this season and she’s learning to embrace the push towards competition.

“I look up to both of my older siblings when I’m running,” Lexi said. “You always want to run with the person ahead of you.”

The Shamrocks will host a dual cross country meet against the Rochester Home Schoolers at Meadow Greens Golf Course on Thursday.

Lewis is looking forward to what will be his final home meet and he’s embraced his final season, which had been in doubt due to the COVID-19 pandemic.