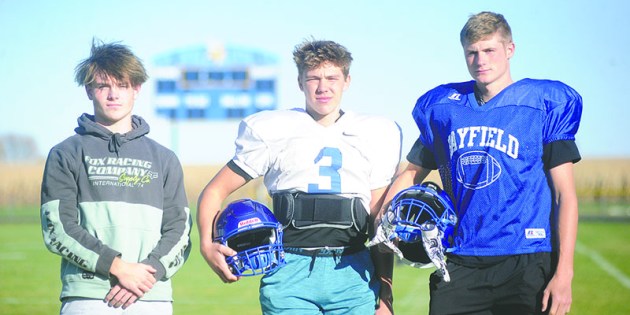 From left, Hayfield’s Cole Selk, Ethan Pack and Ethan Slaathaug have all competed for the Viking football team and cross country team this fall. Pack and Slaathaug ran in the Gopher Conference meet on the morning after their homecoming football win on Friday night. Rocky Hulne/sports@austindailyherald.com 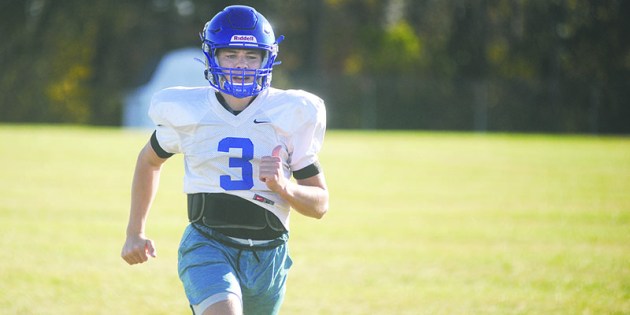 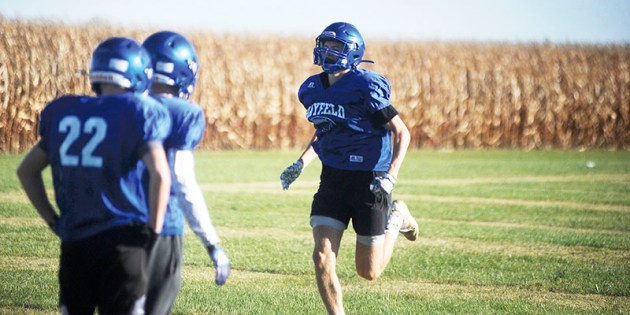 Ethan Slaathaug runs through a drill in practice in Hayfield Monday. Rocky Hulne/sports@austindailyherald.com

HAYFIELD — There are many ways to celebrate a Homecoming football victory — a pizza party, a school dance or a simple team get together would all suffice.

Hayfield senior Ethan Slaathaug and sophomore Ethan Pack chose a more unique route. Shortly after celebrating their season opening win over Winona Cotter, they elected to get on a bus at 8:15 a.m. the following Saturday to run in the Gopher Conference Cross Country meet at 10 a.m.

Pack made his first start at quarterback against the Ramblers and threw for three TDs in that win, including a 42-yard strike to Slaathaug. While they were sore and tired on Saturday morning, both Vikings couldn’t resist the chance to represent their school in two different sports within 12 hours of each other at the tail end of Homecoming week.

“I got home late, I went to bed late and then I had to wake up early,” Slaathaug said. “I thought about not running, but then I woke up.”

Pack and Slaathaug have been focusing on football over the past few weeks, but they couldn’t turn down their cross country teammates at the Gopher Meet and they still plan on running at the section meet. Although their times weren’t their best, they were happy to be able to compete as two-sport athletes on back-to-back days.

Slaathaug actually ran cross country during his freshman and sophomore seasons when he was a bit shorter and wasn’t the college basketball prospect he is today. He certainly wasn’t going to give up the sport when football began.

“I wasn’t the biggest kid and I was alright at running, so I did cross country instead of football at the beginning of high school,” Slaathaug said. “I thought I could beat my buddy Isaiah Tempel after the first lap (on Saturday), but there was no way. My legs just gave out. I was about a minute slower than my best time, but it wasn’t my worst time.”

Pack gave cross country a try when football was postponed at the beginning of the fall season and it has pushed him to work harder.

“I wanted to try something new and it was tougher than I expected,” Pack said. “You just have to have the mentality of wanting to work hard and always getting better. Your body gets kind of sore, tired and worn down and it’s a different type of running than in football.”

Hayfield sophomore Cole Selk also played football and ran cross country this season, but he wasn’t able to run in Saturday’s meet after he had one carry for five yards in the football game. Selk said he learned some new things while running for the cross country team.

“It’s a lot different than football, that’s for sure,” Selk said.

It was a wild week in Hayfield as the school was able to celebrate homecoming with social distancing at the game. The celebration also included a drive-by parade.

Pack had a lot of success playing quarterback against Cotter and he’s willing to give credit where it is due.

“It was a really good team win and I couldn’t have done it on my own,” Pack said. “The line was insanely good. (Slaathaug) helped me out a lot and it was a really fun win.”

Running cross country has not only taken Selk, Slaathaug and Pack out of their comfort zones as athletes. It’s also helped them make new friends from athletes in other schools and broaden their horizons.

“We still go for runs, but we’re doing more football stuff now because we have to know the plays and know what we’re doing,” Slaathaug said. “We have a bunch of new guys out here (playing football) and some of them don’t know what to do yet. We lost a lot of seniors from last year and it was the first game for a lot of guys on homecoming. It was really fun to win.”

The Hayfield football team will play at Faribault Bethlehem Academy at 7 p.m. Friday.