An Austin man accused of inappropriately touching a 15-year-old girl over her shirt made his first court appearance on Thursday in Mower County District Court. 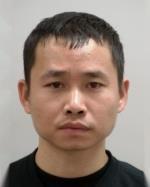 Tar Eh Ghay, 32, has been charged with two counts of felony second-degree criminal sexual conduct – significant relationship – victim under 16 years of age. He has pleaded not guilty to the charges.

According to the court complaint, an Austin detective was notified on May 4 about a sexual assault on a 15-year-old female. A friend of the victim said the victim told her she had been sexually assaulted by Ghay, who was known to her. The detective also learned she had disclosed the abuse to a teacher.

The victim told police Ghay has sexually abused her on two occasions. In both incidents, she said Ghay inappropriately touched her over her shirt. During the second incident, the victim said she managed to “squirm” away from Ghay and told him to stop, but he just laughed at her.

She indicated that Ghay told her not to tell a family member about the abuse.

The detective spoke to Ghay, who said the victim was “lying” because she was mad at him and indicated he only “pushed” her. He did confirm he was with the victim on both occasions.

Ghay’s pre-trial has been scheduled for April 9.