A love of animals

For many kids showing animals through 4-H, the loss of the fair was a blow to a summer of memories.

COVID-19 shuttered fairs throughout the state, with the Mower County Fair holding out longer than most in hopes they could still hold the annual event

But thanks to Compeer Financial’s Blue Ribbon Project, kids still were able to enjoy some aspects of the fair. And for entrants, including Ella Heers, who turns eight years old today, the contest came with some hefty rewards.

Ella was one of those who not only earned $500 for herself, but another $500 for a local nonprofit organization. In her case, it was her own 4-H club, Enterprise 4-H.

“I appreciate (Compeer) doing this and recognizing the work they put in,” said Ella’s mom Sarah. “And the family really.”

The Heers family has a rich history in 4-H and within that history are plenty of memories derived from time spent at the fair, so the idea of not being able to attend this year’s family was hard to take.

But the contest by Compeer Financial, which is a financial ag lending business, came along at the right time to fill the void.

The Heers went the entire nine yards to give the experience as much fair vibe as possible, including cleaning Ella’s calf and letting her parade the calf around their farm.

The family took pictures and included them with Ella’s essay.

“She wrote about the calf and all the work she put in,” Sarah said.

Ella is certainly no rookie in the world of show animals, starting when she was just three-years-old with a five-month-old heifer.

“You did a lot of work that summer,” said dad David.

She also had plenty of time helping out with the county 4-H quiz bowl team, where she played the part of the “buzzer.”

It wasn’t just about taking part though. For all kids, including Ella, it is an opportunity to learn about the animals they show and be a part of their lives.

“It’s a lot more than showing in 4-H,” David said. “It’s trying to get the kids to know about the animals (they are showing).”

In that way of taking part, Ella continues to learn on the family’s farm as she takes part in the calving process and is able to help in a hands-on way.

This process brings more than simply being a part of everything, though.

“She gets excited when she leads the calf by herself,” David said. “Confidence is a big part of it.”

“It’s just really fun,” the eight-year-old said before heading to the cattle pen with mom and dad.

A sum of $500 is no small chunk of change for somebody at the ripe old age of eight, but Ella already has some ideas on what she wants to do with her award.

“I want to get a bottle calf,” Ella said.

Regardless of where Ella’s money goes, taking part in Compeer’s contest was a small return to normal for Ella, her brother Henry, and all of the other kids who took part.

“I think it’s really important that kids are around a little bit of normalcy,” Sarah said. “There’s enough going on that it’s key to keep them busy.” 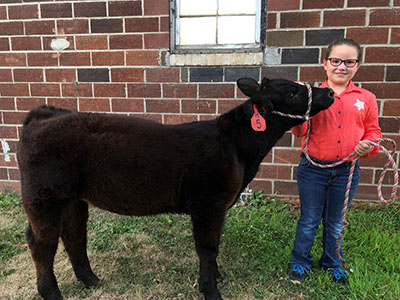 My name is Ella and I am 7 years old.  I am a Cloverbud member of the Enterprise 4-H club.

My project means a lot to me because I have been doing it since I was a little girl.  It is something I do every year.  My first calf’s name was Daisy.  This year, my calf’s name is Hope.  When I lead my calf for the first time without any help it feels magical.

At the fair I always drink chocolate milk laying on my calf.  I am going to miss that this year.

I will miss my friends in the barn since there will not be a fair. 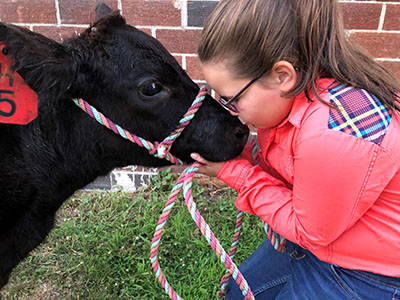