When Walter Keith Singleton was born Dec. 7, 1944, in Memphis, Tennessee, his father was a prisoner in a German POW camp. When he returned home, he taught his son how to hunt and fish and encouraged him in his work with the FFA. 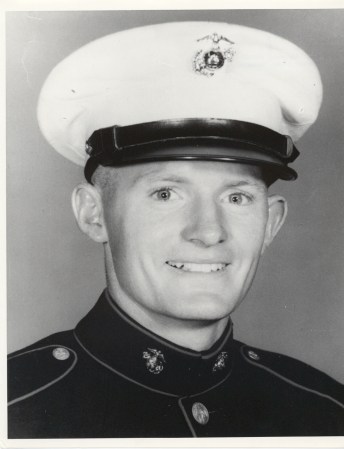 On Aug. 1, 1963, Singleton and his brother joined the Marine Corps Reserves. He completed basic training in February 1964 at Parris Island and was transferred to Camp Lejeune as an ammo carrier with Company E, Second Battalion, Sixth Marine Regiment, Second Marine Division.

While at Camp Lejeune, Singleton attained the rank of Corporal. In November 1965, he returned to Parris Island as a weapons instructor. He also spent time training marksmanship to midshipmen at the U.S. Naval Academy in Annapolis, where he qualified 100 percent of the midshipmen under his instruction.

Singleton was later sent to Okinawa, where he was promoted to Sergeant on Sept. 1, 1966. On Nov. 13, he was assigned as a supply sergeant to Company A, First Battalion, Ninth Marine Regiment, Third Marine Division. On Dec. 11, his unit was sent to South Vietnam.

On March 24, 1967, Company A was conducting combat operations in the Gio Linh District of the Quang Tri Province of South Vietnam as part of Operation Prairie III, which sought to eliminate the presence of People’s Army of Vietnam forces south of the Demilitarized Zone. The lead platoon came under intense fire as it entered the village of Phu An, where enemy forces had established a well-entrenched defensive position. Facing small arms, rockets, mortars and automatic weapons, several members of Company A were wounded and lying exposed in the enemy’s kill zone.

Knowing the wounded had to be moved, Singleton left a relatively safe position and ran into the kill zone to bring the wounded men to safety. Numerous times he exposed himself to danger, only to return to help another wounded man. Records do not indicate how many men he rescued, but accounts indicate multiple men were saved by Singleton’s actions.

During his last rescue, Singleton noticed a large part of the enemy fire was coming from a hedgerow. Arming himself with a machine gun, Singleton made a solo charge at the enemy position. He managed to force his way into the hedgerow and kill eight Vietnamese soldiers, disorganizing the enemy’s defense and driving the remainder from the position before he was mortally wounded.

Singleton is buried in Memphis Memorial Gardens Cemetery in Memphis.