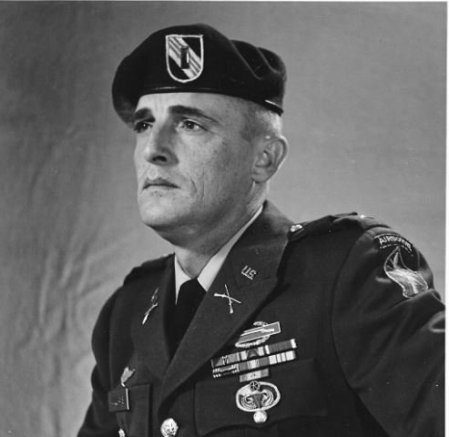 In 1965, 2nd Lt. Williams was sent to Vietnam and made the executive officer of Special Forces A-Camp at the Dong Xoai Civilian Irregular Defense Group (CIDG) Camp located in the Phuc Long Province as a ember of Detachment 342, Fifth Special Forces Group, First Special Forces. The camp consisted of a mix of 24 US Special Forces and Navy Seabees and about 400 Vietnamese Montagnard tribesmen CIDG strikers trained in counterinsurgency under the direction of the CIA.

On June 9, 1965, the camp was placed on full alert when it was discovered the Vietcong, about 1,500 total, were massing for a night attack on the camp. When they learned the camp was on alert, the Vietcong decided to attack earlier, launching a mortar attack at about 8:30 p.m. During the attack, the Special Forces commanding officer was critically wounded, putting Williams in charge of the Special Forces compound.

As the Vietcong began their assault, Williams organized his compound’s defenses and positioned men near the southwestern walls of the camp, where the enemy were concentrating their main effort. He then attempted to make contact with the commander of another compound. After finding no operational radio, Williams attempted to run to the other compound, but was hit by shrapnel in his right leg and forced back by the Vietcong assault.

The Vietcong, who took heavy casualties from the mine and barbed wire defenses outside the camp, soon began to scale the walls. Terrified, several strikers attempted to flee, but Williams charged through a hail of gunfire, getting shot in his left leg and thigh, and rallied them back to their positions.

When he was told that communication had been established, Williams ran to the communications bunker, being wounded in the right arm and stomach by a grenade in the process, and learned that the detachment commander had been wounded, putting him in complete command of the camp’s defenses.

As the Vietcong continued with the attack into the early morning hours of June 10, Williams managed to radio helicopter gunships from Bien Hoa Airbase to attack the enemy forces inside the wire. Despite the gunship attack, the Vietcong still kept up the assault. As the camp’s defenses began to crumble, Williams ordered the American defenders to pull back to the camp’s district building and consolidate with the CIDG strikers.

As the battle raged, Williams directed airstrikes, occasionally firing flares as reference points for the incoming aircraft. But the Vietcong kept coming and by dawn, the district building was besieged. Enemy forces then set up a machine gun position and sent deadly fire into the building. Williams grabbed a rocket launcher and asked for a volunteer to help him destroy the machine gun. One of the Seabees, CM 3rd Class Marvin Shields, stepped forward, despite having been wounded three times during the fight. Together, they attacked the enemy gun with Shields loading and Williams firing.

After destroying the enemy machine gun, both men were again hit as they attempted to return the district building. Unable to carry Shields back, Williams pulled him to a covered position, returned to the building and recruited volunteers to help bring Shields back. Shields died from his wounds the next day.

As the day went on, Williams continued to direct airstrikes while coordinating the camp’s defense. As the airstrikes got closer, Williams ordered the seriously wounded be moved to the communications bunker. In the early afternoon, Williams learned that helicopters would be landing to evacuate them from the area. He then led everyone to the camp’s artillery position and ensured all of the wounded were evacuated before he boarded a helicopter.

The 14-hour battle left 20 Americans and about 200 Vietnamese strikers and civilians killed or wounded. About 500-700 Vietcong were killed.