On a night where scoring opportunities were few and far between, the Packer girls soccer team couldn’t cash in as they lost 1-0 to Rochester John Marshall in Art Hass Stadium Tuesday.

Austin’s last chance came up empty when Izzy Hemann launched a deep pass to Eliana Bentley, who headed the ball towards Hope Dudycha in the open field. However, JM keeper Jordan Clark came out and kept Dudycha from getting a chance with just 20 seconds left in the game.

“I was trying to boot it over the defense for Hope or Eliana,” Hemann said. “I was hoping they could get an open shot.” 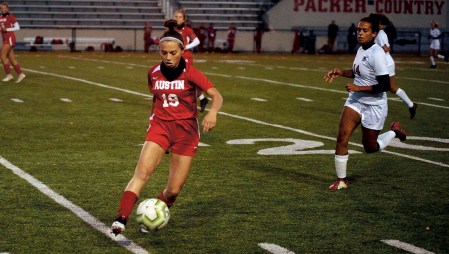 The Packers (1-7 overall, 1-7 Big Nine) held their own for the entire night, but the Rockets (3-5-1 overall, 3-5-1 Big Nine) took advantage of an early Austin penalty when Ava Adams connected on a penalty kick in the 14th minute of the game.

Austin’s Hope Duycha nearly tied the game just a few minutes later, but her 25-yard free kick was stopped on a diving save by Clark.

“I’m very proud of how the girls played,” Austin head coach Jake Levisen said. “It feels very good to be back at full strength for the first time since the first game of the season. We were relentless tonight and Rochester noticed that when they put eight people on defense. I take that as a compliment. Now that our belief as a team is there, I’m excited to see what’s going to happen in our next few games.”

The game was a physical contest throughout and things heated up down the stretch as JM was hit with a yellow card and the Packers were handed three yellow cards in the second half, but they didn’t let up as the game got more intense.

“We always try our hardest and we’re always looking for passes to switch the field so we can attack the net,” Hemann said. “They’re a physical team and we had to make sure we were pushing back.” 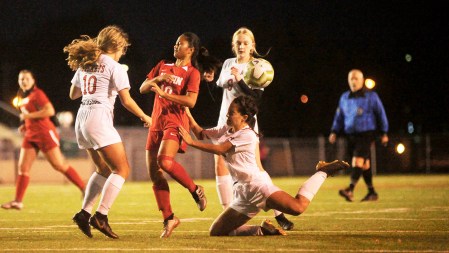 The Packers had five shots on goal and Mya Walters had eight saves in net.

Austin, which has now lost seven in a row, has just two goals during it’s skid and the Packers have now been shut out five times this season.