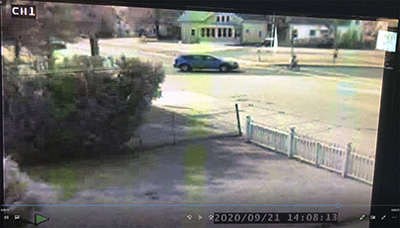 A screen capture from video shows the vehicle moments before it strikes the child. Photo provided

The Austin Police Department is looking for an individual who struck a juvenile bicyclist with her vehicle and left the scene without leaving information.

According to Austin Police Chief David McKichan, a 13-year-old girl was riding her bike at about 2:48 p.m. on Monday when she was struck by a car at the intersection of 10th Drive and Fifth Place Southeast. The driver, described as an older white female, did stop to ask if the girl was okay, but did not remain on scene or give her information to the girl.

The victim was able to walk to a family friend’s house with her inoperable bicycle.

Injuries to the victim consisted of “road rash” to her arms and bruising on her leg.

Video of the accident was recovered from one home owner and shows a small blue cross over-style SUV involved in the incident.

Under Minnesota Statute, a driver involved in an accident that results in injury is required to give their name, address, date of birth and registration plate number of the vehicle being driven.

Vikings’ rebuilt defense dealt another blow with Barr on…