The Austin girls tennis team set a new standard and it showed when the Packers beat Rochester John Marshall 4-3 in Paulson Courts Thursday.

The match was clinched when the No. 3 doubles team of Jaidyn Moriarty and Natalie Haynes pulled off a win over Grace Abdelkarim and Aubrey Ackman in two sets by scores of 6-3, 7-5.

“We hadn’t won in a match in two sets all year and we’ve been trying for that. Usually they go to three,” Moriarty said. “It was senior night and we wanted to get it out of the way. We did it.” 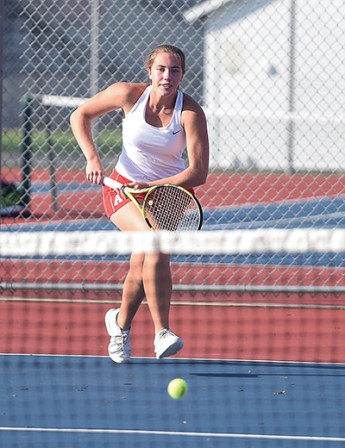 After scoring its first win in a span of two years last season, the Packers have now upped the ante and grabbed their third win of the season with one week left in the season. Austin finished with two wins last year.

“We’ve been wanting to break our record from last year and we’ve been close. We finally did it,” Haynes said. “I think that with this momentum we can win. We broke our goal and I think we’re going to take this and push forward.”

The Packers (3-4 overall, 3-4 Big Nine) were able to score the team win by taking three of the singles matches. Chloe Schmitt, Gracie Schmitt and Kaitlin Meiergerd all won their matches in two sets.

The Packers have three matches and one week left in their season. They will play at Albert Lea 9 a.m. Saturday, at Mankato East at 4:30 p.m. Tuesday and Austin will host Northfield at 4:30 p.m. Oct. 1.

“Honestly, the forward momentum we have is so nice. We’ve been fighting as a team all year to get those three wins,” Moriarty said. “The pressure’s off now. I’m just really proud of everybody this year.”

Austin’s Kaitlin Meiergerd reaches for the ball during her No. 4 singles match Thursday afternoon against Rochester John Marshall at Paulson Courts. Eric Johnson/photodesk@austindailyherald.com

Austin head coach Jeff Anderson was pleased with how his team stepped up on senior night.

“It has been a really long time since we have beat a team from Rochester.  It was a great night,” Anderson said. “I am so happy for our seniors and that they got to see their hard work pay off. Chloe Schmitt played one of her best matches of the year as did Gracie Schmitt as well. The match came down to Natalie and Jadyn at No. 3 doubles and they played a really composed and smart match. We are looking to not have a letdown now as we travel to Albert Lea on Saturday.”