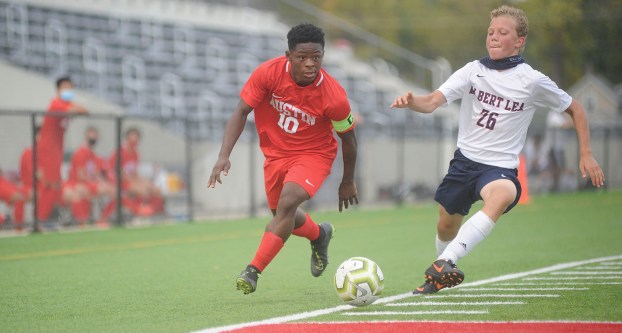 Austin’s Henry Tolbert closes in on the ball in the first half against Albert Lea in Art Hass Stadium Saturday. Rocky Hulne/sports@austindailyherald.com

Pack gets back on track with a lopsided win over AL

It might as well have been an instant replay.

Austin senior Andres Garcia started the second half the same he started the game as he set the tone for the Packers in a 10-1 win over Albert Lea in Art Hass Stadium Saturday.

Garcia, who finished with a hat trick, broke free for a free shot at the net 23 seconds into the game and he came up with a similar score 20 seconds into the second half to push the lead to 7-1 and send Austin on its way to a blowout win. 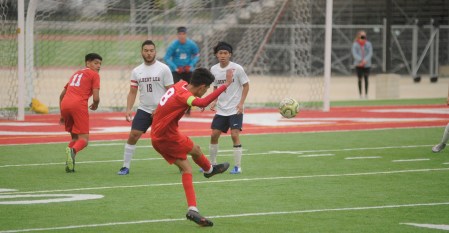 Garcia and the Packers had to adjust their focus and play with energy after the team hit a little bit of a lull in the first half.

“We just played easy ball in the second half instead of trying to take on one or two defenders. We trusted each other more and we kept scoring,” Garcia said. “With us being seniors and it being our last time playing together, we take every game like it’s our last and we keep going.”

Austin (6-0-1 overall, 6-0-1 Big Nine) sat on it’s 1-0 lead to start the game for 24 minutes before sophomore Joe Ewing scored on an assist from senior Henry Tolbert and it took the Packers another 16 minutes before Tolbert scored back-to-back goals in a span of a minute to make it 4-0. Tolbert also finished with a hat trick.

Austin head coach Jens Levisen said he wanted to make sure his team was playing the right way after he saw a few players chasing goals early on.

“We had to come out in the second half, work the ball around with those quick passes and try to create that space,” Levisen said. “I think we ran into a little trouble in the second half. We were up 2-0 for a long time and pulled Henry and Andres off and I told them we have people playing selfishly and holding the ball too long. I wanted us to get out and play the way we can play.” 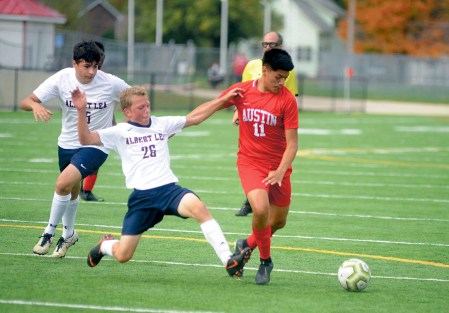 Poe Reh and Jose Valladeres each scored one goal in the win for Austin, but Valladeres was more excited about the transition passes he made to set up Garcia and Tolbert.

The Tigers (0-5 overall, 0-5 Big Nine) got on the scoreboard late in the first half for what was their first goal of the season.

Casey Berg had three saves in net for the Packers, who put up 24 shots on goal. 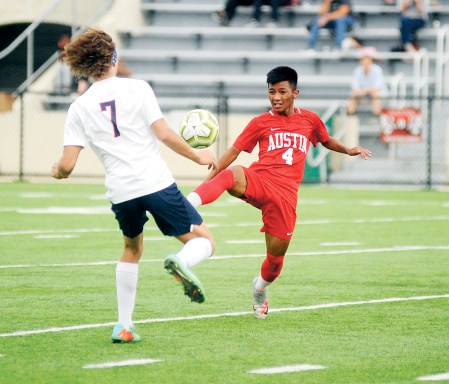 With the schedule winding down, every match is a big one for Austin, which is pursuing its fourth straight Big Nine title.

The Packers have yet to reschedule their match with Winona, but it does have three matches remaining on the schedule and it will close the season at first place North field at 7 p.m. on Oct. 6.

The Packers also have their sights set on a postseason as the MSHSL recently announced that there will be a Section 1A Tournament following the regular season.

“It’s our last year, we’ve got to give it our all,” Valladeres said. “The more games, the better.”

Levisen isn’t anticipating the Packers will get a chance to make up their game against Winona, but he’s hoping the Big Nine will find a way to give Austin credit for that game. Either way, he knows the next three games have immense importance in the conference race.