Oballa named to the MSCU Board of Trustees 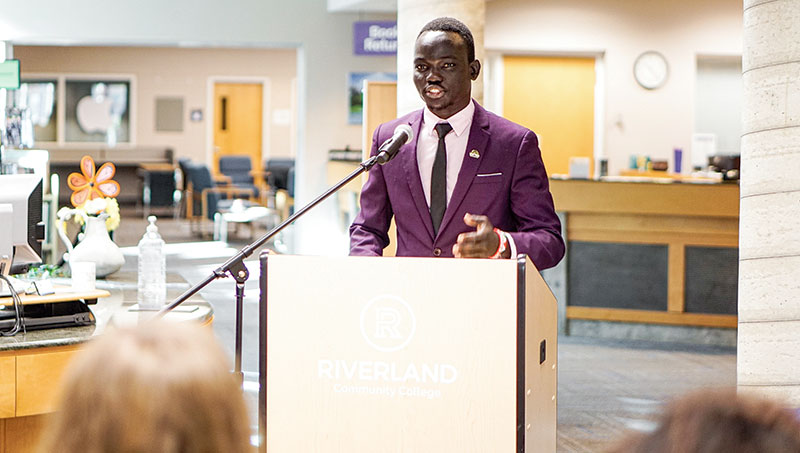 Oballa, who applied to be part of the 15-member Board as a community and technical college student, is no stranger to working with its members. He frequently addressed the Board while serving as president of Lead MN

“I would testify in front of them and bring the issues of community and technical college (students) and they would make a decision to either increase or decrease tuition and ask for more money from the Legislature,” he said. “They work for the system and everything they get they share with every college.”

Oballa applied for the position through the urging of several friends who recognized his passion for various issues. At first he was hesitant.

“I didn’t know if I would get it because it is a very competitive position and the governor has to go through a lot of applications,” he said. “I didn’t believe it (when told about the appointment). I thought my application was not likely to be picked because there are a lot of people who are current Board members who applied for that position and people who have been in America for a long time and have great resumes.”

As a member of the Board, Oballa will make decisions on issues on behalf of colleges and universities in Minnesota.

“It’s an amazing thing; to be picked is rewarding work,” he said. “No one has ever been appointed from Riverland and I have not seen anyone from the southeast serve on the Board of Trustees. For someone like me, who started working with the system recently, to be picked by the governor is a great honor, not just for myself, but for Riverland Community College. The work started at Riverland, and now I’m part of the whole system representing students from Riverland.”

Oballa added that he hopes to see more students from Riverland and Austin on the Board in the future.

Oballa, who spent time in a refugee camp in Kenya after his family fled civil war in their home country of Ethiopia, first heard about the award from a friend who was also nominated in 2019. He knew people had nominated him, but only found out earlier this month that he would get the award.

“(The coordinator) called me on the phone and she said, ‘A lot of people nominated you. In our history, you’re the first person to get more than 70 nominations,’” he said. “I was really shocked.”

The award recognizes those with refugee status who have made contributions to their communities in areas ranging from civic engagement to entrepreneurship. Oballa’s award is in the Young Leader category.

“I think this is a blessing; this is the work of God,” he said. “I don’t have any words. this is one of the highest awards I’ve ever received in my life. I think this will be highlighted in the refugee camp that I come from. I think they will have an article about it; some people have already contacted me from the camp in Kenya so that they can publish something to inspire other refugees when they come to America to not limit themselves from reaching higher because of their status. I always tell my peers that America is the land of opportunity, but opportunity doesn’t come for you. You have to go out and be involved and help as much as you can, work hard and those dreams will come to you. I feel this is part of the American dream coming my way now.”