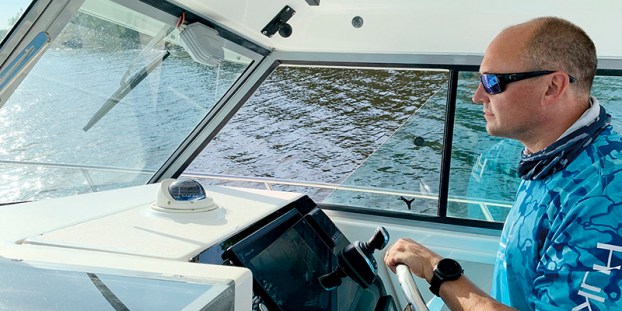 Gregg Hennum runs the only water taxi to and from the Angle. He also owns a piece of Sportsman's Lodge Resort on the Rainy River and their sister lodge on Oak Island, a stone's throw from the border.John Enger | MPR News

If you want to go to the Northwest Angle right now, in the middle of the pandemic, you’ve got two options: Either you own a 25-foot speedboat with huge engines, or you go with Gregg Hennum.

Minnesota’s northern border with Canada has been closed to all but essential travel since the early days of COVID-19, which means the Angle — that isolated triangle of land at the very top of Minnesota that’s reachable by road only through Canada — has been almost entirely cut off.

Canada deemed fishing trips to be nonessential, and without anglers heading to the walleye-rich waters of Lake of the Woods, the Angle’s entire economy — the dozen resorts that employ just about everyone who lives there — would nearly collapse.

So now, you can’t drive to the Angle, and Lake of the Woods — which is all U.S. water from Baudette, Minn., to Angle Inlet, Minn. — is too rough for the typical 16-foot fishing boat to cross.

But Gregg? He’s got you covered.

Along the border waters of Minnesota, you don’t even need his last name. Everybody knows Gregg.

He owns a piece of Sportsman’s Lodge Resort on the Rainy River, and its sister lodge on Oak Island, way up in Lake of the Woods, a stone’s throw from the Canadian border.

But most importantly, right now, Gregg runs the only water taxi to and from the Angle.

He’s the Angle’s one-man COVID-19 life-support system — the only reason Angle resorts are just hurting in the pandemic, and not dead.

But Gregg, it turns out, is hard to find. If you head out to the docks outside Baudette at 6 a.m. to meet him, they might be empty.

You pace and watch the sun rise, wondering if you have the right day. But just give it a minute, and finally a small crew files down the dock to load boxes of mac and cheese and Folgers coffee onto a huge fiberglass speed boat. It’s Gregg’s.

But none of them is Gregg.

Before too long, you meet Gregg’s wife, his daughter, his pet dog and Evan Smith — who goes by Schmidty — one of his hired boat drivers. But Gregg himself is probably taking care of some other business. He’s a busy man, they say. Just get on the boat, they say. Gregg will probably show up later on.

The one other passenger on the boat who isn’t related to, or employed by, Gregg is a young software developer from Duluth, Minn., named Zak Josephson. He’s not going up to the Angle to catch walleye. He’s going there to look at real estate.

“Not having to be around big crowds and infectious diseases and loud political people,” he says. “It sounds like a slice of peace, I guess.”

He’s thinking about buying one-sixth of a small island, just offshore of the Angle. The isolation appeals to him. The border closures are a selling point. The Angle tends to attract this type of thinking.

The boat takes you across 40 miles of rough waves in an hour and a half. Stone islands rise from the water. It’s a beautiful place, but strangely vacant for this time of year.

Gregg’s wife says your best chance at meeting Gregg will be on the evening return trip. In the meantime, you can borrow a Toyota pickup truck the family keeps at Young’s Bay Resort. So that’s where you get off the boat.

Young’s Bay is one of the bigger resorts on the Angle. It has a huge concrete monument proclaiming it as the northernmost point on the Lower 48. The monument is a repurposed manhole structure that’s usually buried under city streets.

The resort is adorned with huge Trump signs, just two months before Election Day. Inside an empty bait shop on the shore sits its owner, Richard McKeever, in a black and red “Trump 2020” hat.

He points out his window at the resort’s boat launch.

“On a normal morning like this,” he says, “we’d have boats lined up, waiting to launch here. You couldn’t see the end of them. Now look what we’ve got.”

The launch is empty.

McKeever says he understands why the borders have been closed since March. If he were a Canadian official, he’d have done the same thing. But it’s been brutal for his business. Nearly all of his guests get here by car, through Canada. Now his few die-hard customers have to come up on Gregg’s water taxi.

“There is some money coming in,” he says. “It’s just not nearly enough to make my payment.”

At least it’s his dad he’s not paying, he points out — so it’s not a complete disaster.

Ask about Gregg’s Toyota, and McKeever points you to a parking lot that should be full of boat trailers, but isn’t.

The Angle’s economy is built entirely on a dozen resorts. Half are on nearby islands scattered in Lake of the Woods, and half are in the mainland town of Angle Inlet, population 60. You can reach them by the town’s gravel roads, all 10 miles of them.

The resort owners all say the same thing. No one here is making a profit. They’re scraping by, but it could be worse, they say, if Gregg wasn’t filling his boats with paying customers, bait and beer.

One resort, Angle Outpost, usually has 40 guests this time of year. This year, in late August, the grand total is four, owner Jason Goulet says. They were all dropped off by Gregg.

Brian Sage, at Sage’s Angle Resort has just two customers — a father and son, dropped off by Gregg, who also brought the night crawlers the resort sells them each day for bait.

And at Protheros Trading post, one of the handful of remaining guests mows the lawns. Grace Prothero says he was able to talk his way through the border: Lawn mower, an essential worker. The rest of the guests — well, you know how they got there.

Gregg’s fingerprints on the place are obvious.

It’s not as though locals spend much time with Gregg. He’s a busy man, after all, with kids and two resorts and a water taxi service. But they all agree he’s a class act. You don’t doubt it, having heard so much about him. Sure would be nice to catch up with him in person.

As the sun sinks while you wait on the dock at Young’s Bay for the return trip, a boat motors up — it’s Gregg’s dad, who he drags out of retirement from time to time to drive boats for him. After a quick ride, he drops you off at another resort, with very little explanation.

You pace the dock.

In the distance, there’s another boat. And this time, at long last — Gregg.

He cuts the engines and drifts into the dock. He never ties off. Just tells you to step on.

“Who did you talk to on the Angle?” he asks. You rattle off some names.

You stop at his lodge on Oak Island, just offshore of the Angle. Gregg kicks back in the captain’s seat and tells the short version of his life’s story. He grew up here on Oak Island — learned to read in the Angle’s one-room schoolhouse. A third of the class shared his last name. Their school bus was a fishing boat.

He took over his dad’s resort after college. The shuttle service was just a side hustle, until this summer.

“I did the math,” he says. “Last year was average. About 170 trips. This year we’ll probably triple that.”

Gregg realized early on in the pandemic that the Angle was going to need a highway of sorts, across the water. And he was the only guy in a position to make that happen. He scaled up quickly: built a website to take reservations, and bought a second 30-foot boat. Outfitted it with twin 300-horse motors. He just bought a third, and put on almost 2,000 miles in 13 days.

A round trip for one passenger costs $140. Most runs are nearly full. He’s recouping the investment quickly.

But it’s not about the money. The Angle is in Gregg’s blood.

“I’ll do whatever I can to make this work for everybody,” he says. “It’s been crazy. I’m a little nervous about the winter.”

If this keeps up, winter, he says, will be a whole different animal. It’s one thing to race back and forth in speed boats. But ice? Ice complicates things. There are pressure ridges and slushy places. You have to know how thick it is, or you might go through. And you either have to plow an ice road, 40 miles across the small borderland sea that is Lake of the Woods, and maintain it every time it snows. Or you have to run track vehicles.

He starts explaining all the problems that come with track vehicles — they like to break down, is the general theme — but another boat in his growing transport fleet arrives, and he says it’s time for you to head back to Baudette.

Gregg is a very busy man.

University of Minnesota announces plan to return students to campuses

MINNEAPOLIS — The University of Minnesota on Tuesday announced a plan for students to return to three of its campuses... read more