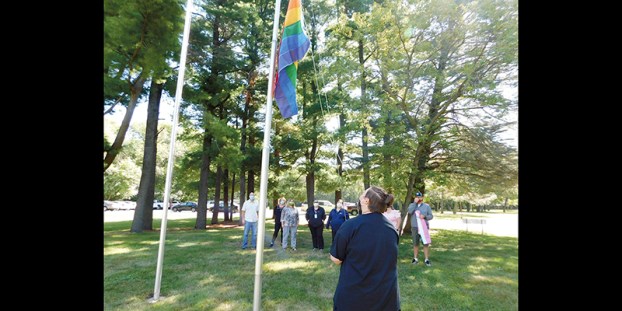 Now imagine you are a transgender teenager being admitted to residential treatment to work on past trauma. You have all those same unknowns, but you have the added worries of whether you will be understood or accepted when many times in your life you have been shamed.

What if there was a symbol of acceptance and equity right from the very first moment you were coming down the driveway. Would that calm your fears in some small way? That is exactly what one of the Nexus-Gerard Family Healing youth was trying to accomplish when they made a proposal to the leadership team.

“When I first got here, I was scared and didn’t know what to expect or if I would be accepted for who I am,” remembers the youth. “I didn’t feel safe until I got in the dorm and met some of my peers that were like me”. A few days passed, and the youth wondered if there could be some way that new youth arriving at Nexus-Gerard could see, right from the start, that they would be safe and accepted.”

“As I spent a little more time here, I noticed that there are six flag poles when you come down the driveway, but only one being used, flying the US flag,” the youth continued. “I thought, wouldn’t it be great if we had LBGTQ and transgender flags flying on a couple of those unused flagpoles to let new kids like me know that they will be accepted here.” The youth’s therapist set up a time for the youth to talk to the leadership team of Nexus-Gerard Family Healing and the proposal was accepted.“

Friday was flag raising day at Nexus-Gerard. Staff and youth gathered around the poles while the youth who spearheaded the project raised these symbols of equality and acceptance. When the youth was asked how they were feeling about seeing the flags finally flying they responded, “I am very excited to see this day come, I love it.”

Democrats at laptops. GOP at your door