Man charged after allegedly threatening man and kicking his dog

According to the court complaint, a Mower County deputy responded to a disturbance call at about 6:29 p.m. on Aug. 30 in the 100 block of Clinton Street in Mapleview. Dispatch advised that an adult male reported that Gilbert had threatened to kill him and his dog. He also reported that a juvenile female with Gilbert had kicked the dog. 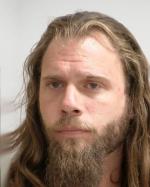 The deputy arrived at the location and observed that the dog was limping. The man reported that he and an adult female were talking when a silver colored SUV arrived and Gilbert and the juvenile came to the door. He said Gilbert walked into the house looking angry and said he wanted his speakers. He indicated Gilbert said he was lucky that he did not “kill” him or the dog.

The deputy did not see any obvious injury to the dog, which was friendly and did not display any aggression.

The deputy then spoke with the woman, who said that Gilbert “just walked into the house” asking about some speakers. She said Gilbert then got aggressive and told the man, “I’m going to kill your (expletive).” She also said she saw Gilbert and the juvenile kick the dog and that both threatened to kill the man and his dog when they drove away from the residence.

At approximately 9:48 p.m., two deputies made contact with Gilbert and the juvenile at Gilbert’s residence in the 600 block of 13th Street Northeast in Austin. Gilbert indicated that he went to the man’s residence and went inside because the door was open. He said he asked about his speakers, which were not at the residence. He then said he left the house and the man’s dog suddenly “attacked” the juvenile while she was petting it. He said the juvenile then “pushed the dog away” and they left. Gilbert denied that the dog was kicked and denied that he made any threats toward the man or his dog.

Gilbert was arrested and escorted to a squad car. The juvenile then got upset and yelled, “I kicked that (expletive) dog.”

A review of Gilbert’s criminal record shows prior convictions for assault. He is currently awaiting disposition on a felony domestic assault charge.

Gilbert will appear in court again on Sept. 10.

Author’s note: This is the continuation of the Herald’s candidate Q&A features and the second such feature with Rep. Jim... read more