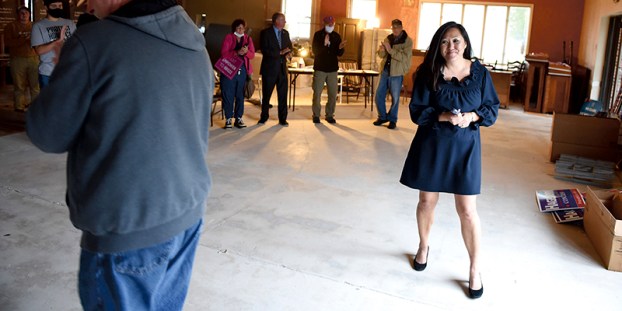 Minnesota GOP Chairwoman Jennifer Carnahan is introduced by Doran Kasel at the GOP Headquarters in Austin Wednesday afternoon where she gave an update on the Republican efforts to turn the state red. Eric Johnson/photodesk@austindailyherald.com

‘It’s really a one team approach’

In front of approximately 30 people, which included state and local candidates, Minnesota GOP Chairwoman Jennifer Carnahan spelled out what will be needed this November to turn the state red.

The stop in Austin, taking place at the GOP headquarters in what used to be Sports Bar and Grill on the west edge of Austin, was the sixth stop for Carnahan, who has been traveling the state in order to energize voters.

“As people are looking at 2020 in Minnesota … Minnesota has been trending and shifting in the red direction for many elections,” she told those gathered. “The president has said himself, ‘If I had only come back to Minnesota, I would have won it.’ Please, come back as many times as possible.”

Several nationwide polls have Biden ahead of Trump anywhere between +2 and +12. But in Minnesota, polls have the two tied, lending credence to Carnahan’s claims on Wednesday.

Carnahan said the ground work will be what’s important this time around and is urging volunteers and staffers to get out with the word, while simultaneously claiming, “Joe Biden and his team are sitting in their basements.”

“Our teams and our people are fired up,” Carnahan said. “We’re out there working.”

Minnesota has been a target this year of both local, state and national Republican efforts to help turn the state. Trump and his surrogates have visited the state often this year in an effort to not only turn out the base, but get those potential swing and independent voters.

Carnahan, who also pointed toward those votes, is in no way concerned that voters will be sitting on the sidelines for this election, despite the deep partisan and oftentimes nasty politics.

“I think people are going to vote,” she said afterwards. “I don’t think we have to worry about people not coming out to vote.”

“I think it’s really going to be focusing on the issues,” she continued. “What we’re hearing all over the state is the concern of what’s happening in Minneapolis/St. Paul and a governor and mayor that basically sat on their hands and let the city be decimated twice.”

In the days following Floyd’s death the Minneapolis City Council vowed to defund the police, something Republicans have latched onto in recent months.

“And then the narrative coming out of Minneapolis City Council about defunding the police and we’re seeing murders up and carjackings up … all these really bad things,” she said. “People are really concerned. We don’t want that coming to our part of the state, coming to our community, and they know the president is behind law and order.”

Carnahan also spoke on the important role of local and state candidates and how they work as a team in the effort to re-elect Trump to a second term. She lauded the campaigns of Republican candidates Patty Mueller and Gene Dornink, who are running against Rep. Jeanne Poppe (DFL) and Sen. Dan Sparks (DFL) in House District 27B and Senate District 27, respectively.

Both spoke Wednesday night, along with Rep. Jim Hagedorn, about the need to swing the state.

“People like Patty Mueller and Gene Dornink down here,” she said. “These are great candidates. You couldn’t ask for better candidates on the state legislative level.”

Strong campaigns on the lower levels work hand-in-hand with the national campaigns.

“That’s how you make an impact because we are running on one ticket,” Carnahan said. “Those two doing well helps the president, helps Jim (Hagedorn) and vice versa. It’s really a one team approach.”