Hands on Design: Through strength of will, Lindsey and Shane Hanson have turned art into a career

What started out as a quest for an artistic hobby has turned into a successful business in rural Adams.

Lindsey and Shane Hanson have put themselves in a position to leave their jobs to pursue a dream in the making in Rustic Oak Designs. The business that creates and sells custom signage, 3D cutouts and printed pictures has taken off since its start in 2017.

From its earliest beginnings in 2012, when the couple first started thinking of the venture, Rustic Oak was to be a hobby, but with early success it swiftly turned into something more.

“You’ve been talking about wanting to make signs for years,” Shane tells his wife on a sunny afternoon in the couple’s shop.

Sitting on an acreage just north of Adams, the shop features room for both avenues of the Hansons: A place to print and construct. 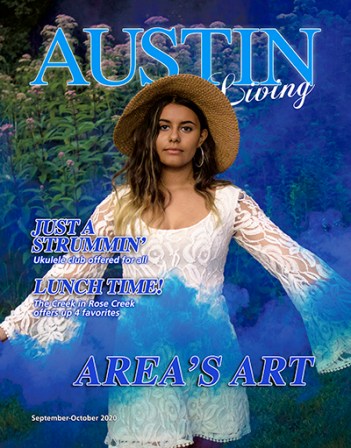 Find this story and more in the latest edition of Austin Living Magazine, out now.

In the smaller of the two rooms, Lindsey designs and prints, while on a work table in the same room as well as in the bigger workshop, Shane does the finishing work on the frames as well as assembling the final project.

With Lindsey’s talents for design on the computer and Shane’s carpentry background, the Hansons have settled into a home decor niche that can artistically set off a home.

“We booked our first pop-up show or vender show before we even made one sign, which is kind of crazy, but I think we had a lot of faith and we knew we would figure it out,” Lindsey said. “We made over 100 signs the first month and it was a huge hit for us and very successful.”

Don’t let the presence of a large printer and 3D printer fool you. Rustic Oak came from the humble beginnings at the Hanson’s kitchen table.

“It was like a process,” Lindsey said. “(Shane) would come down here and cut the sign and then bring it up here and I would paint and stencil it. Then I would bring it back down here to frame it.”

For about a year and half the couple did things like this, learning as they went.

“I didn’t really know what I was doing either,” she said. “We just figured it out as we went, even though we’ve never done it, we figured it out.”

In the space of just a few years, the Hanson’s got to a point where they were able to make something more of this opportunity, and while any small business venture takes some bravery, the Hanson’s really had to steele themselves for the next step.

This past May, Lindsey left her position as RN at Mayo Clinic — just as COVID-19 was taking off. Shane, likewise, has shifted to part-time construction work with an eye of getting out all together.

Together, the two had the creative skills to make it work, but time really put a pinch on everything.

Both were working their full time jobs and in their free time, they had to make Rustic Oak work.

On top of that, the Hansons are parents to four children, whom they obviously didn’t want to neglect.

Oftentimes, it resulted in both Lindsey and Shane staying up to 1 or 2 a.m. and even later at times.

The problem of time was complicated by the fact that Lindsey was doing everything by hand. That was when they decided to make an even bigger leap in purchasing a printer.

“We did a lot of research, so we decided to do a printer to help us with sign-making in 2019,” Lindsey said.

The printer opened up the world to Lindsey and Shane, who soon after added more options to their business.

“We were able to do photos,” Shane said with Lindsey adding, “And that’s really taken off for us. It’s probably our no. 1 seller.”

Most of the Hanson’s business is done online through their Etsy store, though they have gone to shows and festivals. However, with the online portion doing so well, the couple has started moving away from those.

Even though Rustic Oak is finding its stride, it doesn’t mean there haven’t been some headaches during the process. Not long after the printer was purchased, Lindsey’s computer crashed and it wasn’t properly backed-up. Over 350 designs were lost and to further complicate matters, it was just before Christmas.

However, the two continued to work through it and even though there are doubts sometimes, confidence wins out.

“I still feel like that every once and awhile,” Shane said as he talked about occasional doubt. “I have no doubts we’ll continue to be busy and if we’re not, we’ll figure out a way to be busy.”

The next step was the purchase of the 3D printer that allowed them to branch out even further with cutouts that can run simultaneously with the printer.

Through it all, the Hansons have built a creative business out of sheer determination and neither one of them harbors any regrets about taking this path.

With each step, the Hanson’s are becoming ever more successful with a careful eye on the future and the next steps.

“We want to figure out a way to grow,” Lindsey said.

The uncertainty of fall: Area athletes are trying to stay calm amidst season delays

In a normal Minnesota fall sports season, area football teams would be under the lights this Friday night and area... read more