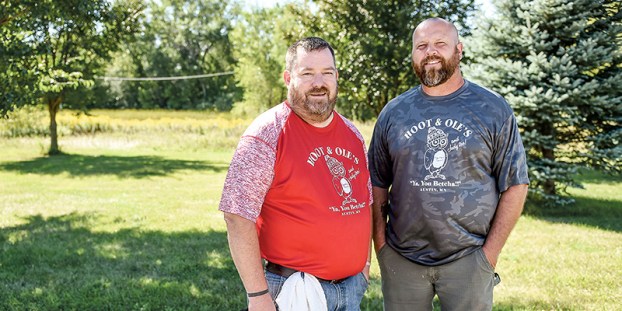 Jeremy Olson and Jeff Bawek are taking part in a marathon day of golfing. Eric Johnson/photodesk@austindailyherald.com

With the COVID-19 pandemic slowing down fundraising efforts for the Dutchtown Jumpers, Jeremy ‘Ole’ Olson and some of his friends are hitting the greens to make up for some lost time.

Olson, Jeff Bawek, Sen. Dan Sparks, Ryan Weichmann, Mike Upcraft and Cody Upcraft will be playing as many holes as possible in a four-hour stretch at Meadow Greens Golf Course on Sept. 12.

Olson said he lost five fundraising events this year due to the pandemic and he’s hoping to garner some big support for the Longest Day of Golf.

“We’re trying to get creative and do some fundraising with everything being shut down and not being able to have large crowds,” Olson said. “If we can hit $10,000, I’d be very happy.”

The golfing will be done in pairs as Olson will team up with Weichmann, the Upcrafts will be together and Bawek will golf with Sparks.

Bawek lost his father to cancer and he has always been a big supporter of raising funds to fight cancer.

“Hoot and Ole’s has kind of become a family over the last few years with all of the things that they do for the community,” Bawek said. “I’ve always wanted to give back and this is one way to do it.”

In the early 1990s, Bawek once played 276 holes in one day while golfing in a similar event that lasted an entire day. This year, he won’t reach those numbers, but he’s going to play as many holes as he can.

“At this age, I’d probably need traction after (276) holes,” Bawek said. “I think you feel the physical pain a couple of days after. I don’t know if the mental part is tough, because it’s such a good cause. Everything is being done for the community. How can you not try and do something.”

Anyone interested in donating money or sponsoring a hole can can swing by Hoot and Ole’s Tavern.

The Dutchtown Jumpers began several years ago when they started their support of the Hormel Institute with a jump into Eastside Lake that raised $700. Since then they have raised $154,376 for the institute’s research.

With the COVID-19 pandemic and hybrid learning on the table, it was sure to be a hectic start to the... read more