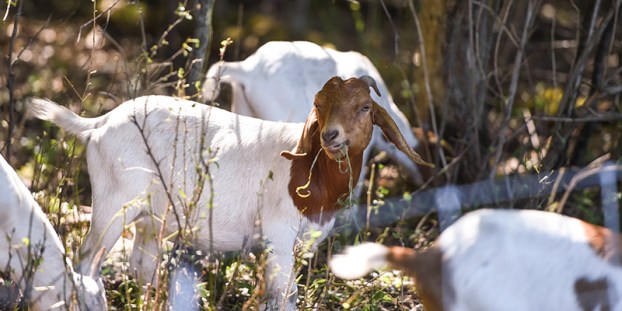 A goat grazes in the Jay C. Hormel Nature Center, part of an effort to help reduce buckthorn and other varieties of evasive plants. Eric Johnson/photodesk@austindailyherald.com

Anybody visiting the Jay C. Hormel Nature Center recently may have noticed a new addition.

They quickly grab people’s attention as they stop to watch the goats go about their time spent eating; however, the goats aren’t there as a new educational project. Instead, it’s the eating that’s important as the Nature Center continues to work against invasive plant species.

“Buckthorn and honeysuckle are the two big ones,” said Nature Center Director and Naturalist Luke Reese. “The nice thing about goats is they like to graze on woody stuff and small trees.”

The goats belong to Gus Mayfield, who started a local chapter of Goats on the Go; however, that wasn’t the original intended use of the goats.

“I actually looked at it for a couple years before I decided to do it,” Maxfield said. “My main interest was to take care of our own property that has buckthorn and a whole bunch of evasive species.”

Maxfield’s operation quickly grew by “leaps and bounds,” and has since grown  to 120 goats. That’s 100 more than the 20 he started with.

It was Maxfield that came to the Nature Center with an offer to try them out, something Reese was inclined to try even though it hadn’t been on his radar. 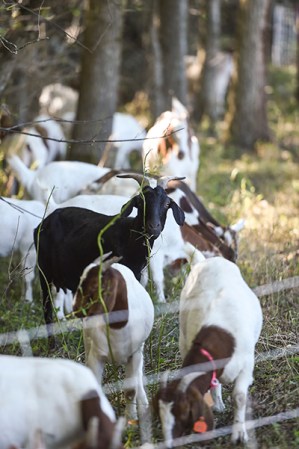 The goats belong to Gus Maxfield who has become a local affiliate for Goats on the Go. Eric Johnson/photodesk@austindailyherald.com

For awhile now, the Nature Center has been trying to knock down the buckthorn on its land.

According to the Minnesota Department of Natural Resources, Buckthorn is non-native to Minnesota and can crowd out native species, which in turn those trees and shrubs being pushed out our home to many species of birds.

The goats are not only able to gobble up the growth, but they also  can rework the land through their droppings turning it into a healthier product.

“They’re natural recyclers,” Maxfield said. “They basically eat all the bad stuff and refertilizes right behind them. When they do that … they kind of neutralize the seeds of the buckthorn. It helps to control it.”

At the same time though, one thing that Reese is watching is just how much the goats will affect the Nature Center as a whole.

While they take care of the buckthorn, the concern becomes just how far the goats will go.

“Goats are a little non-discriminate,” he said. “You have to keep tabs on how everything looks every day.”

Currently, the goats are working a two-acre area along the main path near where the old Visitors Center stood, but they will likely be moved to another area.

Whether the Nature Center continues to use Maxfield’s goats after the trial is still to be decided, but for now there is no doubting how popular they have become to those visiting the Nature Center.

“I think they are neat. I think they are doing a great job so far,” Reese said. “I’ve been blown away by the interest the public has shown in the goats. I’ve had more people asking me about those goats.”

“It’s been wonderful,” he added. “If the vegetation responds we’ll be finding a way to keep in our management plans.”

For more on Goats on the Go, visit their website.

The Mower County Humane Society will be holding its annual Friends in Need Walk For Animals this Sunday at Todd... read more